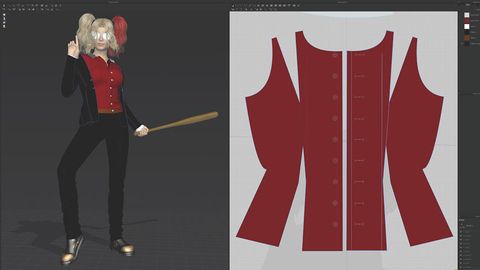 While the new features make MD6 a pleasure to work with, the output often still needs reworking in other applications. Also, the pricing is too much for too little.

The first major release of Marvelous Designer was back in 2011, and since then, the cloth simulator has come a long way. In that time, Marvelous Designer has grown its reputation as the must-have tool for cloth and clothes simulation for films, games and animations, and Clo3D has settled into an annual release cycle of both sensible and solid releases.

With Marvelous Designer 6 (MD6), Clo3D has again focused on user requests and tailoring garments to users' exact needs. New tools such as Solidify will maintain your garment's folds and wrinkles based on the strength you assign it – handy as it means you don't have to redo said folds and wrinkles, even when resimulating.

Chalk enables you to draw reference lines on your garment; and new feature tweaks like symmetrisation, delete all Curve Points, and align and distribute, offer an all-in-all easier workflow.

The main features in this release are without a doubt buttons and steam. This very welcome addidition makes it infinitely easier to generate buttons and buttonholes, which must be a relief to anyone who's spent considerable time creating and editing buttons in earlier versions.

Steam is another handy feature. As the name suggests, Steam's job is to de-wrinkle your digital garment. This means you don't have to spend time tweaking your fabric and drape settings or freeze parts of a garment you want to keep as-is – all you do now is run the Steamer button over the parts of the garment you want smoothed, and it's job done.

While the new features make MD6 a pleasure to work with, I'd have happily lived without a chalk line in favour of better export options, quads and topology, as the output often still needs rework in ZBrush or other applications, detracting from time saved elsewhere.

Also, one month of MD6's one-function program at $60 will get you Steam Modo Indie, the Substance Suite and Photoshop with about $15 change – meaning the pricing is too much for too little, especially for freelancers and small studios.

This article was originally featured in 3D World issue 215; buy it here

While the new features make MD6 a pleasure to work with, the output often still needs reworking in other applications. Also, the pricing is too much for too little.