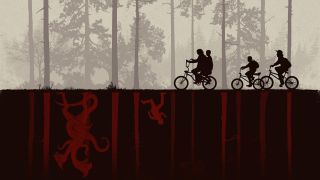 There are two types of people in the world: those who haven't seen the smash hit Netflix show, Stranger Things, and those who bang on and on about it with a fervour previously reserved for the likes of Breaking Bad and Game of Thrones.

It's a gloriously retro fantasy horror adventure created by the Duffer Brothers, inspired by all your favourite 80s classics such as E.T., The Goonies, Poltergeist, The Thing, Stand By Me and many more, with a fabulous cast of plucky kids, fretful parents and evil government scientists, and over the past few weeks it's touched nostalgia nerves worldwide.

The production's hit all the right retro notes, from the spot-on title sequence complete with a John Carpenter-style theme tune and Lucasfilm-like logo design, through to a pitch-perfect poster by Kyle Lambert (see it below), and naturally it's inspired artists and designers to create their own Stranger Things art.

We've hunted for our very favourite pieces of Stranger Things artwork and narrowed them down to (of course) the best 11. Enjoy the selection, but beware of mild spoilers; if you haven't seen the show yet then get on the case and then come back!

Netflix commissioned Kyle Lambert to create the official series poster in the style of hand-painted vintage posters. He sketched it out in Procreate on his iPad Pro, then exported his work to Photoshop to finish the job off. The Duffer Brothers also commissioned Lambert to produce paintings of the show's characters in the same style; these were printed onto canvas and given to the actors.

Continuing the retro theme, Martin Gendre made this poster advertising the Atari 2600 video game version of Stranger Things that would have definitely happened if the series came out in the 1980s. The poster looks amazing, but you just know the game would have gone the way of Atari's ill-fated E.T. game.

Here, Brazilian illustrator Gabriel Soares C. Viana turns his attention on the show's four young protagonists and gives them a pixel art makeover that hits all the right notes.

Poster Posse have come up with three Stranger Things posters already, and this one, by Thomas Walker AKA TommyPocket Design, is by far and away our favourite.

Who can resist these character designs by Vic Matos from São Paulo? His illustrations really capture each character's personality; particularly Dustin. Everyone loves Dustin, right?

Instead of focusing on the usual scenes and characters from Stranger Things, in this poster Matt Needle instead turns his eye on a small but important prop – the D20 die used in the gang's game of Dungeons and Dragons – and then gives it a bit of a sinister twist.

You have to love these minimal designs by Lucas Mello; he neatly captures each of the five kids in a few vectors, and of course he puts Dustin in the centre, not Eleven or Mike. Dustin rules.

It took us a while to find out the name of this poster's designer; step forward J Caleb, who uses bright colours and a limited palette to emphasise the difference between Stranger Things' two worlds.

Matt Ferguson's poster also illustrates the two worlds of Stranger Things: the real world and the Upside-Down. After revealing it on Twitter as a just-for-fun project, he released it as a limited set of posters for charity; naturally they're all long gone by now.

We'd tell you more about what's going on in Comingsoon's Eleven-focused poster, but it's totally spoilers. Look away!

This brilliant GIF from Francesca De Vivo imagine what Stranger Things would look like as a 90s-style adventure game; pretty cool, we reckon.