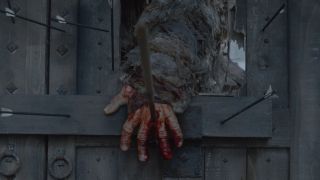 Fans of fantasy drama Game of Thrones (that'll be just about everyone, then) will know the show's producers don't shy away from blood and gore. You can watch Game of Thrones online right now as the final series kicks off with more grisly scenes. Season 6 was one of the more gruesome yet – VFX studio Imagine Engine was responsible for many of the death scenes, using 3D art and VFX to hike up an impressive bodycount of 72 over the course of the season's 10 episodes.

So the studio's already impressive design portfolio also now includes 22 killed by sword, 14 by slit throat, one by pike and one memorable death by dog (ouch!). But its not all doom and gloom, the team also harnessed the power of VFX to bring one character back to life. Watch the film below to find out how they did it.

“Some shots were really specific, like someone getting their head smashed directly against a wall,” says compositing lead Edwin Holdsworth. “To get the look right for that we filmed real meat being smashed. We used the same technique for shots where one character has their hand pulled apart. The best way to match the level of gore needed was to pull some meat apart, and use that in the comp. It all felt more realistic that way!”