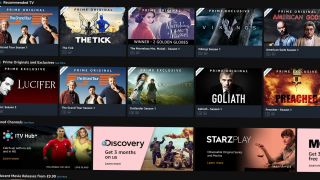 Amazon Prime day 2018 is nearly upon us (official kick-off is midday on Monday 16 July), and to reap the benefits of all the sweet deals we have coming your way, you're going to need an Amazon Prime account. It's quick and easy to sign up, and you can try it for a month completely free, so it's a win-win.

Get a free 30-day trial of Amazon Prime

Take advantage of thousands of Amazon Prime Day deals by signing up for Prime membership or a free 30-day trial here:

Once you're signed up you'll be able to take advantage of all the Prime Day bargains and much more besides, including the Prime Video library of movies and TV shows that you can enjoy any time at no extra cost. It's a great additional benefit for Amazon Prime subscribers (there are actually quite a few hidden gems that come with membership); your only problem might be that there's almost too much to choose from.

That's why we've had a look around and picked out five of our favourite TV series available to watch right now on Prime Video. There are some lauded classics, unexpected hits, and one that just about defies explanation. Enjoy!

You can't move for comic adaptations these days, but if you're finding it hard to choose between them then for our money you'll find it hard to do better than AMC's adaptation of Garth Ennis and Steve Dillon's Preacher. It's the everyday tale of a disillusioned preacher who acquires a supernatural power and sets out to find God along with his ex-girlfriend and a degenerate vampire, and is a magnificent mix of pitch-black humour, over-the-top violence and good old Southern charm.

It's hard to be unaware of Parks and Recreation – it's probably the best US sitcom in recent years, after all, and without it we'd have been a lot less likely to have ever heard of Chris Pratt. But if you're in the UK, it was easy to miss its late-night broadcast on BBC4, so here's a perfect opportunity to catch up with it without having to splash out on boxsets. Pro tip: season one isn't that great, so if you're not feeling it then by all means skip right on to season two.

Undercover Russians infiltrating the USA and pretending to be wholesome American citizens? What a crazy idea! Set during the Reagan era, when Cold War paranoia was at its most bonkers, The Americans focuses on a pair of long-settled Soviet sleeper agents and has it all: old-school tradecraft, pitch-perfect 1980s pop culture references and the ever-present worry that our two anti-heroes might get caught out by their neighbour, who just happens to be an FBI agent.

We've had one of the best US sitcoms, so here's one of the best from the other side of the pond. Created and written by its two lead actors, Sharon Horgan and Rob Delaney, Catastrophe's about as far as you can get from Parks and Rec's heartwarming larks. It starts with a one-night stand in a hotel between Sharon and Rob that kicks off a chain of life-disrupting consequences, unexpected pregnancy being just the first of them.

Savagely funny and quite unexpectedly tender at times, it's a brilliant exploration of how real life has no respect for whatever plans you might have had. It also features Carrie Fisher's last acting role, as Rob's mother.

Have we saved the best until last? We don't know! But we happened upon this Japanese series about an introverted massage therapist who keeps getting sucked into murder cases, which he solves though the powers of massage. Yes, massage. We don't know about you, but we're totally binge-watching Massage Detective Joe at the next possible opportunity. Apparently his catchphrase is, "That's this case's pressure point!", and he ends each episode by doing a special dance. We've never needed to see a foreign language TV show quite so badly.