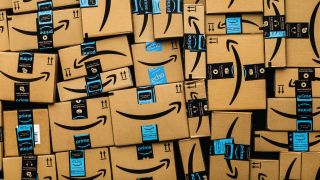 Black Friday and Cyber Monday are just around the corner, which means not long to go until you can grab a creative bargain. Right now, retailers all over the globe are busy getting ready for the big day, and Amazon is no exception. A one-stop-shop for almost anything you could ever want, Amazon's Black Friday 2019 bonanza looks set to be bigger and better than ever before.

So what deals can we expect to see from Amazon UK? We know the main event kicks off on 29 November and culminates on the 2nd December with Cyber Monday, but we can now get even more specific with what to look out for on Amazon.

That's a whole lot of time to get a good deal, right? Let's take a closer look what type of Black Friday deals will be on offer.

Amazon will be running three types of deals during the course of the event. First, the Lightning Deals. These are usually heavily discounted items that are on offer for a super-short amount of time – often just a few hours. Then before you know it, it'll be gone. So it will pay to have your finger on the pulse for these. This year a press release from Amazon states: "New lightning deals will becoming available as often as every five minutes."

Secondly, the Deals of the Day: a promotion that will last for 24 hours. These are slightly less frantic but still be prepared to be fast because products may sell out quickly.

And lastly, the Best Deals. They do what they say on the tin, they're Amazon's pick of the best deals on the site, and will be included on Amazon's UK deals page.

If all of this sounds exciting but like a lot of hard work, don't despair. We don't want you to have to spend your weekend glued to your laptop, waiting for the perfect deals to go live. Instead, why not bookmark our Black Friday hubs that will give you all the info on where to get the best deals around?

We'll be updating all these hubs with the best and latest deals as they go live. And one thing we've learned from previous events is not to hang around if you see what you want at the right price. These deals are likely to sell out fast, so you'll need to be quick to avoid missing out.

See below for a range of deals currently available on products for creatives.