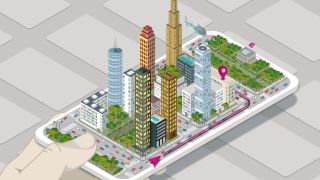 So what is AR.js? AR.js was developed by Jerome Etienne with the idea of making AR available to everybody. It improved performance and made augmented reality run faster on mobile. Thanks to its optimisation, AR went from running at 4fps on high-end phones to 60fps on three-year-old phones.

The library was first built on projects like three.js, ARToolKit 5, emscripten and Chromium. It was, and still is, a pure web solution, based on standards. So it works on any phone with WebGL and WebRTC. And, as an added bonus it is open-source and completely free.

The beauty of AR.js is that it makes AR accessible without the need to install any applications and obtainable without having to buy specific and expensive devices. Everybody already has an AR enabled device in their pockets: their own phones.

How the code works

The success of AR.js is based on its performance and simplicity. With AR.js you can code AR in only 10 lines of HTML using Mozilla’s A-Frame. Check out the code.

This simplicity has triggered interest and experimentation, trial and error from people with and without a technical background and it is what has ultimately led to the adoption of the library by more and more designers and developers.

AR.js is ever-evolving and now includes workflow improvements with multi-markers. Check out ‘Augmenting The Web Page’, a way to display AR directly on the web-page by scanning a QR code (an idea that you can apply to e-commerce or advertisement). And of course, support for ARKit and ARCore. AR.js also provides the best tracking available on any device and it runs in all platforms. If you want to start building AR for the web make AR.js your first port of call.

Want to know more about WebAR?

Alexandra Etienne is an AR/VR evangelist who works with Lightform, a startup in California  building the first computer for projected augmented reality. She is on a mission to share AR.js with the world.

In her talk at Generate London 2018 Alexandra will show the advantages that web-based AR can  bring, what others have created with it in and what you can do with  AR.js library.

Don't miss out. Get your ticket now