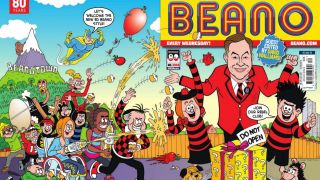 It's time to dig out your slingshot and striped jersey as The Beano celebrates 80 years of causing chaos and inspiring readers both young and old. To mark the occasion, David Walliams has joined the team to guest edit the comic which has been running since July 30 1938.

Having set itself apart from other comics upon its launch by doing away with dreary blocks of text that slowed down the story, The Beano went on to cement itself as the go-to publication for kids looking for a fix of mischief. UK readers will no doubt be familiar with the famous Beano characters that emerged over the years, including The Bash Street Kids, Minnie the Minx, and of course the Dundee-based comic's most famous creation, Dennis the Menace.

So what's the secret behind The Beano's enduring success? How come it's still going strong after the likes of The Dandy have fallen by the wayside and young readers have moved online? The answer can be found in the comic's continuing drive to innovate, along with a uniquely anarchic humour you just can't find elsewhere.

Just as The Beano shook up how comics looked in the thirties, these days it's embracing online platforms to bring innocent menacing to the digital world. As part of the 80th birthday celebrations, a souped-up Dennis and Gnasher Fan Club has been launched, with offerings including printable club badges and membership certificates. Members can also access password-protected areas of the site with a secret code to unlock a treasure trove of pranks.

This digital upgrade builds on the legacy of a comic which in its heyday in the '50s sold in the region of two million copies every week. A wealth of creative talents have contributed to The Beano's success, including the legendary Leo Baxendale, and more recently Jon Burgerman.

To celebrate with the big day, Dundee's McManus museum is putting on an anniversary exhibition, as well as being renamed McMenace in the process.

In his editor's letter, Walliams said: "What I always loved about the Beano was that it felt naughty. It was a comic that you should read under the duvet with a torchlight. I don't think I'd have got into writing my books without Beano."