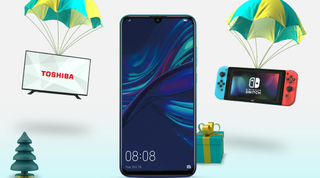 Who wants a free Nintendo Switch games console or Toshiba 4K HDR TV, as well as a new phone? Yes, you really can get all of this with EE's stunning deal, which just goes to show that the best Black Friday deals are already appearing.

The phones you can get are the Samsung Galaxy A80, A70 or A40 or a Huawei P30 Lite, Huawei P30 Pro or Huawei P smart. Sign up for one of these right now through EE and you could be enjoying a nice new shiny games console or a super-sharp pixel perfect screen in your living room very soon.

These deals offer some of the best phones around, some of them even made it our best camera phones post. With prices starting from as little as £28 a month these deals are not to be missed. They all include 10GB of data and there's no upfront cost on selected phones.

To help you make the right choice quickly and easily we have broken down these must-see Samsung and Huawei deals. Find the one for you below.

Huawei P30 Pro with 10GB of data for £59 a month
One of the best phones currently on the market, the Huawei P30 Pro boasts a high-powered camera with an impressive 50x zoom, great battery life, gorgeous display and a powerful processor.
View Deal

Huawei P30 lite with 10GB of data for £34 a month
The Huawei Pro is a less powerful version of the P30 Pro but still packs a punch with a 48 megapixel camera, 128GB of storage, a 6.15" screen and unlimited minutes and text with no upfront costs.
View Deal

Huawei P smart with 10GB of data for £28 a month
This Huawei P smart comes at a price that is hard to resist, especially with the free gift. Get yourself an impressive 6.21" screen, a 13 megapixel camera and only pay £20 up front. View Deal

Samsung Galaxy A40 with 10GB of data for £31 a month
The A40 is a great phone at a great price and there are no upfront costs to pay. It comes with 64GB of storage and up to 512GB of external storage, a 5.9" screen and a 16 megapixel camera.
View Deal

Samsung Galaxy A80 with 10GB of data for £49 a month
The Galaxy A80 is a power-packed phone that brings with it impressive features. Get yourself 128GB of storage, a fancy 48 megapixel triple camera and a fast Octa-Core processor.

Not quite what you're after? Check out some more smartphone deals below.