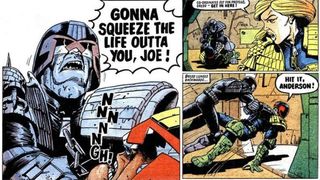 The comic book world is in mourning as legendary artist Steve Dillon passed away this weekend, aged 54. His death was confirmed on Twitter by his brother, Glyn Dillon, who said he will 'sorely miss my big brother and my hero'.

Born in Luton, Bedfordshire, in 1962, Steve Dillon's prodigious talent saw him starting work as a professional comic book artist at the age of just 16, where he drew the title story for the first issue of Hulk Weekly.

During the 1980s, Dillon went on to draw for Warrior and Doctor Who Magazine, where he created the cult-favourite character Abslom Daak. From there he went on to illustrate for 2000AD, before collaborating with author Garth Ennis on Hellblazer and Preacher.

Claire Howlett, editor of ImagineFX, said: "Steve was a genuine giant in the comics industry and a master of storytelling. His originality blazed out of every line he put to paper. It’s a tragedy to lose him, but there is a small consolation – because he started so young in comics, he leaves behind a monumental legacy of art that we we’re able to enjoy forever. Thank you, Steve."

News of Dillon's death has lead to an outpouring of tributes via social media from fans, colleagues, artists, and authors.

Marvel is saddened by the passing of Steve Dillon, a great storyteller. We offer condolences to his family and remember his incredible work.October 22, 2016

We lost a giant among creators and artists today. Steve Dillon will be missed by us all here at DC and Vertigo. pic.twitter.com/ZpYVQBgwwfOctober 22, 2016

We're still reeling at the news that Steve is gone. Our deepest condolences go out to his family and friends https://t.co/KOGWWbhjhQOctober 23, 2016

Steve Dillon was one of our best quiet dramatists. Will miss him RIP https://t.co/5W7DBv2sKmOctober 22, 2016

Just heard about Steve Dillon's passing. It's been so long since we've talked, but he was kind to a young writer long ago, and a good guy.October 22, 2016

I never knew nor met Steve Dillon but his work was a big part of my childhood in the 80's. He started at 16 and that was an inspiration too.October 22, 2016

Dredd. Grim. My version of dredd wouldn't exist without Steve Dillon's art. So much of my early… https://t.co/lzcKn5wLWiOctober 23, 2016

Steve Dillon one of the first comic pros I ever got to know when I was starting out. Always generous, always hilarious, always brilliant.October 23, 2016

I spent quite a bit of time with Steve Dillon. He always made time to talk and I really enjoyed his company. Really sad about his passing.October 22, 2016

On my bookshelf Steve Dillon will live forever. RIP.October 22, 2016

Steve Dillon was a master storyteller. PREACHER, PUNISHER, all of it done with so much exceptional skill + magic. We lost one of the greats.October 22, 2016