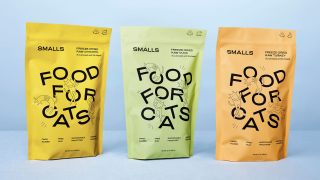 If the number of videos and amusing pictures on the internet are anything to go by, it looks like people love cats. But until the launch of a recent campaign for cat food brand Smalls, this fondness for felines hadn't been immortalised in font form.

All that's changed though thanks to the launch of a new font created by Smalls' lead designer, Miles Barretto, in partnership with Good Type Foundry. By studying the movement and behaviour of cats, Baretto modified the upper case font Adieu to capture their distinctive essence.

Unless you're more of a dog person, this set could easily rival some of the entries in our list of the best free fonts for designers in your affections.

But how does the nature of a cat get translated into a typeset? Barretto explains: "I looked into the body language that cats make, and particularly got drawn to the tail."

"There was a nice natural connection to translating the cat tail into letterforms - it was also a great learning experience as to how cats can communicate through body language."

The result is a quirky, slinking font that will appear on the packaging of Smalls' freeze-dried cat food bags. Just take a look at how the apertures in the letters meander, and the way the terminals have a smooth kink in them. Looks pretty cat-y to us.

For Barretto, one of the most interesting parts of the project was putting himself in the mindset of cats and their owners.

"I think it’s fascinating to know that within cat owners there is a commonality of experiences in having a cat and trying to translate those unspoken facts through the design was a learning process that I have not really thought of until working with Smalls."

The font was part of a broader effort to inject some "surprise and delight" into the brand. To top-off the project, Barretto also created Small Talk Magazine, a print accompaniment to the Small Talk blog.