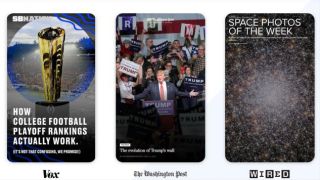 Google has given mobile websites a new way to share content with the launch of AMP Stories. Described by the search engine as a "visually rich [form] of storytelling" the tool treads a similar path to Instagram Stories.

For those not familiar with AMP (which stands for Accelerated Mobile Page), it's an open-source project that loads content on mobile websites extremely quickly. The system was developed around two years ago in response to Google noticing that users were spending more of their time in apps rather than on conventional websites.

AMP Stories, on the other hand, is Google's answer to content-sharing platforms like those found on Snapchat, Instagram and Facebook. In short, AMP Stories, which has just been launched as a developer preview, will be a full-screen display of content for mobile users. The format will appear in Google searches, with readers able to tap or swipe their way through the content.

AMP Stories has already been picked up by The Washington Post, CNN, Mic, Conde Nast, Wired, People and Mashable.

It's still early days for AMP Stories, which are yet to be dotted with adverts. It's only a matter of time, though, until sponsored messages start popping up, with a Google spokesperson saying that ads and further details about the platform are due to appear in the coming weeks.

Given that Google updates play into its rankings, it's no surprise to learn that adopting AMP Stories could give websites a real boost on search engine result pages. This is because Google looks favourably on sites that load their content as quickly as possible, and nothing gets much faster than AMP.

"While some stories are told best through text, the AMP Project wanted to ensure publishers can invest in new ways of storytelling and engaging readers on the open web," said Google AMP Project engineering lead Malte Ubl, speaking in an AMP Wordpress post.