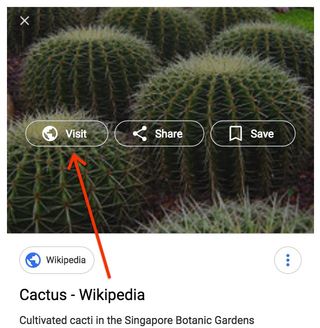 Grabbing a picture from Google's image search just got a bit harder. That's because last night the search engine giant revealed that it has removed the View Image button from Google Images searches.

Whereas users used to be able to search an image, pick a result they liked and view it on its own, now you'll have to go into the site the image is from to view the asset. So is this good news for creatives? Or is it a backwards move, like some suggest?

According to Getty Images, it's great news. The photo library had complained that Google's image search made it easy for people to find Getty Images pictures and take them, without the appropriate permission or licence.

And for publishers, certainly, it's great news. Now they can serve ads and earn more revenue based on the extra click-throughs.

The announcement, however, which was made via Twitter with screenshots of the new image search buttons – visit, share, and save – has been met with negative feedback from others. And we're wondering if Google deliberately used an image of a cactus as it broke the news to acknowledge that it's a prickly issue.

Many have suggested that the unique benefits of using Google Images have now been removed. Others have labelled it a " backwards step", and pointed out that right-clicking on an image and selecting 'open image in new tab' or 'view image' means you can still access the asset.

Google, for its part, has been quick to confirm that the change did indeed come about from a settlement with Getty Images.

Today we're launching some changes on Google Images to help connect users and useful websites. This will include removing the View Image button. The Visit button remains, so users can see images in the context of the webpages they're on. pic.twitter.com/n76KUj4ioDFebruary 15, 2018

For those asking, yes, these changes came about in part due to our settlement with Getty Images this week (see also https://t.co/a5uFldOcih). They are designed to strike a balance between serving user needs and publisher concerns, both stakeholders we value.February 15, 2018

Ultimately, Google Images is a way for people to discover information in cases where browsing images is a better experience than text. Having a single button that takes people to actionable information about the image is good for users, web publishers and copyright holders.February 15, 2018

So what do you think? Is this a step forward in the war against image theft? Or a backwards move that does little to protect creative copyright? Let us know on Facebook or Twitter.