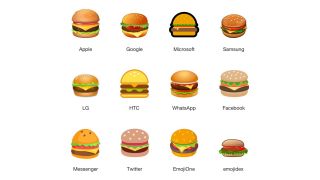 A Tweet about the design of Google's burger emoji has sparked an intense online discussion about how the foodstuff should look, and prompted Google CEO Sundar Pichai to say he would 'drop everything' to fix it. Seriously.

If you've ever doubted the power of social media, the recent development surrounding Google's burger emoji (that's a phrase we never thought we'd have to type) will show you how impactful it can be.

Following a viral Tweet from author and media analyst Thomas Baekdal, which complained about the placement of the cheese in Google's burger emoji, the CEO of the world's leading technology company has vowed to put the emoji's design above everything else. If that's not power we don't know what is.

I think we need to have a discussion about how Google's burger emoji is placing the cheese underneath the burger, while Apple puts it on top pic.twitter.com/PgXmCkY3YcOctober 28, 2017

The Tweet might appear pretty innocent on the surface. After all, have you ever seen a burger that places the cheese underneath the meat? Of course not. That would be madness. Such a burger could only exist in a world gone topsy-turvy. Yet, inexplicably, there it is.

This burger bizarreness could explain why, at the time of writing, the Tweet has gained nearly 40,000 retweets and nearly 2,000 comments. Clearly this is an important issue that a lot of people feel strongly about.

And because people who are interested in emojis appear to be anything if not thorough, the full list of burger emojis has been dredged up from emojipedia like a political scandal for us all to gawp at and contemplate.

How did we, as society, let this happen?

One person clearly disturbed by this flagrant disregard for burger etiquette was Google CEO Sundar Pichai, who replied to the public outcry with this placating Tweet:

Will drop everything else we are doing and address on Monday:) if folks can agree on the correct way to do this! https://t.co/dXRuZnX1AgOctober 29, 2017

This isn't the only emoji to be publicly shamed, though.

Google's pint of beer emoji has been dragged through the mud like an accessory to murder thanks to its gravity-defying head of foam, which appears to hover above the alcoholic good stuff like a tipsy cloud.

Hmmmm, Google, this is not how beer works pic.twitter.com/rLsmThcLKMOctober 29, 2017

Perhaps they need a new illustrator, some icon design tips, or at least some decent reference images.

There's no word yet on whether or not Google has fixed the placement of cheese on its burger emoji. But with the top technological minds in the world working on it, surely it won't take long to fix?