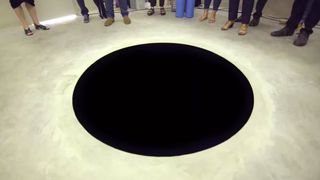 Falling into a painted hole is the sort of surreal misadventure you'd expect to catch out Wile E. Coyote, but that's just what happened at an installation of Anish Kapoor's experimental design work at the Fundação de Serralves, the Museum of Contemporary Art, in Porto, Portugal.

The artwork in question is Kapoor's 1992 piece Descent into Limbo. This installation features a cube-shaped building containing a 2.5 metre hole set into the floor. Ever the fan of optical illusions, Turner Prize-winning Kapoor painted the hole black to make it look like a 2D circle.

Despite the museum following all security measures, displaying warning signs and positioning a member of gallery staff inside the installation building itself, an Italian man in his 60s fell into Descent into Limbo.

Following the accident, which took place on 13 August, the museum closed the installation to assess the situation and ensure it doesn't happen again. Fortunately, the hospitalised museum-goer is said to be in good condition and will return home shortly.

This isn't the only time the artist has experimented with the colour black. Back in 2016, Kapoor acquired the exclusive rights to a pigment so black that it absorbs 99.96 per cent of light.

Descent into Limbo is one of the 56 pieces of the artist's work on display as part of Anish Kapoor: Works, Thoughts, Experiments. The exhibition is the first major show of Kapoor's work in Portugal, with Descent into Limbo due to reopen soon.