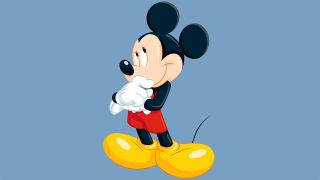 [Originally published in May 2019]

Twitter has uncovered an official Disney drawing of what Mickey Mouse should look like from above, and it's not pretty. One of the first rules of character design is that your creation needs to look good (or at least make sense) from all angles, but back in 1930 this was apparently not a consideration. Ready to see Mickey in all his bird's-eye view glory? Here you go:

It's a blessing that this is not a view often required in cartoons, because there's a whole heap of stuff wrong with this rendering. Why do his hands look like a tutu? Why does his belly stick out so much [update: apparently those are his feet]? And what on earth is going on with his eyes?

The original drawing comes from a patent for a Mickey Mouse toy (see it here), but the woman we have to thank for bringing this view of Mickey into our lives is content strategist Chappell Ellison.

I've been on this planet researching for a very long time and this is the first time I'm seeing an overhead view of Mickey Mouse pic.twitter.com/7SpdXCNq99May 9, 2019

Responses to the tweet have been more passionate than you might expect for a drawing of a cartoon character. Perhaps because he's so well-known, being faced with this new information feels a little like looking in the mirror and realising your eyes are a different colour than you thought (well, not quite, but similar). Comments range from 'Cursed' to 'Oh hell no!' to 'I HATE THIS SO MUCH'.

There's also quite a heated discussion of the famous mouse's ears, with some arguing that they should actually be spherical.

There's currently an animation rule for Mickey where his ears have to look circular no matter which direction you're facing him. IIRC that rule was a huge hassle for Epic Mickey devs.May 9, 2019

If you move around Mickey Mouse 180 degrees, his ears switch positions on his head.May 9, 2019

Who knows what the discussions were when Mickey was first being penned, but we do know that top-down view of the famous little mouse is something we'll never be able to unsee! Would it be better if it was animated? We'll leave you to ponder that one.