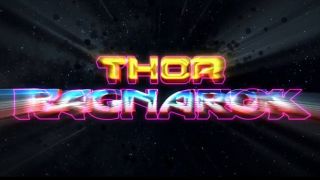 Yesterday was a big day for comic fans as they were treated to the trailer for the upcoming Thor: Ragnarok film. The movie, which will be the 17th instalment in the Marvel Cinematic Universe, sees Thor going head-to-head with another Marvel favourite, the Incredible Hulk, in what promises to be an epic confrontation.

However there's plenty more for eagle-eyed designers to get excited about. Interspersed throughout the trailer is a distinctive logo design and word mark (see above) packed with 80s charm and the signature technique of renowned comic book artist Jack Kirby.

That's right, the faint blob shapes which appear in the light beams blasting out from behind the logo are what fans call the Kirby Krackle. This artistic convention represents mysterious energies and dates back to Jack Kirby's work on the Fantastic Four and Thor comics in the 1960s.

On top of this nod to Marvel heritage, the Thor: Ragnarok wordmark is filled with details that have got designers pining for the past. Whether it's the transition effect that echoes the Superman films from the late 70s and 80s, or the shiny, blocky typeface that wouldn't look out of place on a Commodore 64 game, there's plenty to enjoy. And, a usual, they've taken to Twitter to praise the design work...

I do like that the logo looks like there will be an amazing Commodore 64 tie in game. #ThorRagnarok pic.twitter.com/Fn0uoh09RZApril 10, 2017

Not sure if this was a visual reference for the RAGNAROK design… but I sure hope it was. pic.twitter.com/vRWw7yWwxuApril 10, 2017

My only irk is that the Thor logo is a bit too much like Guardians. They're both using similar effects and vibe.April 10, 2017