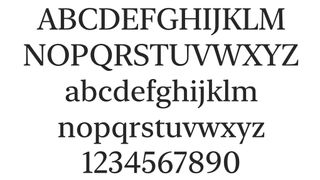 It's been a busy day if you're a fan of all things Apple. At its WWDC 2019 conference, not only did the tech giant introduce iOS 13 and launch a beautiful new Mac Pro with a price tag that would bankrupt most of us, it also unveiled a new system font.

Stylish serif typeface New York is now available to download for free (if you need more complementary typefaces, check out our roundup of the best free fonts). Available in six weights and four optical sizes, New York is a counterpart to sans-serif typeface San Francisco. The font takes its name from a transitional serif typeface created by graphic designer Susan Kare in 1983.

However, eagle-eyed Apple fans have spotted that New York isn't quite as new as the announcement suggests, as it has featured on Apple's Book app since late last year.

There's also a pretty big caveat in how New York can be used, tucked away in the terms you'll be asked to agree to when you download it. The terms state: "THE APPLE NEW YORK FONT IS TO BE USED SOLELY FOR CREATING MOCK-UPS OF USER INTERFACES TO BE USED IN SOFTWARE PRODUCTS RUNNING ON APPLE’S iOS, macOS, tvOS OR watchOS OPERATING SYSTEMS, AS APPLICABLE." You have been warned.

This isn't the only exciting piece of typography news to come out of WWDC 2019. Apple also revealed that custom fonts are among the new features for the iPadOS. These will be added to the App Store so users can start adding custom fonts into apps.

"Fonts from boutique and major vendors such as Adobe, DynaComware, Monotype, Morisawa and Founder will be available on the App Store," a statement int the Apple newsroom explains.