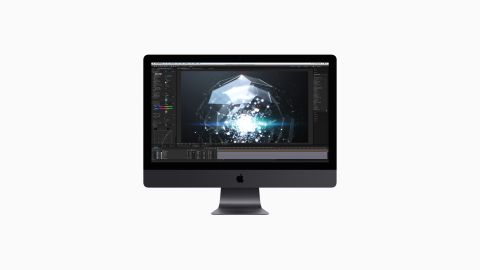 Colossal power, monster price tag – but if you actually need that power, your decision to buy is a simple calculation specifically based on whether the iMac Pro will make you more money than it costs

You don’t buy the iMac Pro because you want it; you buy it because you need it. And the only reason you need it is if having its huge power at your disposal literally and specifically makes you more money. And, as it goes, for this to be true, you’re likely to be a VAT-registered company, in which case, the hair-raising £9,188 spec we’re reviewing here actually works out at £7,657.

And if all that sounds like we’re trying to talk you into buying one, let us say right now that most creative pros, even those who consider that they put heavy demands on their hardware, don’t need the iMac Pro. It commands huge reserves of power, but there are few who can put enough pressure on it to capitalise on that power.

The traditional Apple creative pro market – illustrators, image editors (even those doing heavy manipulation of raw files from anything short of medium-format digital backs), film editors working even in 4K up, even many 3D modellers – don’t need its power. They can’t access it. They can’t feed it enough work.

Bar the dark grey finish – which, aesthetic judgements aside, blends more sympathetically with many modern dark pro apps’ interfaces and the coming macOS’s Dark Mode – it looks just like any other recent iMac, but Apple has done lots of work inside to allow the high-end components to vent heat. This is important; powerful chips generate heat, and the iMac’s slim shape would normally be antithetical to this.

It works hugely well; the fans aren’t silent under heavy load, but they can vent the heat so well that there’s almost no impact on performance even on hot summer days (as would happen with less well-designed systems, which throttle performance as heat builds), and perhaps just as important, they spin down as fast as they spin up once the load has passed.

The workstation-class CPUs are all preposterously powerful, and they support Intel’s AVX-512 tech that allows developers to squeeze even more performance per cycle out of the hardware; we’re likely to see this tech implemented in Apple’s own pro apps first. The 18-core option will likely be most useful in scientific contexts rather than creative.

If it’s formal benchmarks you want, other folks have delved deep into that, but let us give you a flavour: a test we did of transcoding a 4:10-long 4K ProRes clip using Compressor’s Apple Devices 4K and Better Quality 1080p presets as well as its Blu-Ray mastering preset took 7:18 on the iMac Pro, and more than twice as long on a first-gen iMac 5K, which was specced to the hilt and so itself no slouch.

The SSD is silly-fast; in the region of 3GB – gigabytes, not gigabits – per second. This doesn’t just mean fast file operations such as reading untranscoded high-res raw video footage in Final Cut Pro, but also adds to the responsiveness – the perceived speed – of the machine. Apple has achieved this in part by using two SSDs together, controlled by its custom T2 chip (responsible for much else in the system), and though they won’t tell us exactly what they’re doing, only confirming it’s not using one of the RAID standards, we do have some un-answered concerns about data integrity.

The Ethernet ports support 10Gb/sec speeds (10 times faster than the broadly adopted Gigabit Ethernet standard), which is significant if you frequently pull files off a server or SAN – so long as your network infrastructure matches it.

In addition to the built-in 5K display, you can add either four 4K displays or two 5K displays. The built-in display is nice, but it doesn’t support HDR (and so if you’re working with very high-end images or footage, you’ll be missing colours unless you add an external mastering monitor), and though it supports P3 colour, this focus on the kind of colour space dedicated to displaying images on screen does come at the cost of poorer colour performance for print-intent work in the Adobe RGB colour space.

Frustratingly – not because anyone in their right mind would buy an iMac Pro just to use as a monitor, but because having the flexibility to do so now, or the option of retiring an iMac Pro to that role after it’s been superseded, is great – Apple hasn’t restored the pre-iMac 5K feature, Target Display Mode, on the iMac Pro. With the 5K, there was a bandwidth issue with Thunderbolt 2 that prevented you from connecting another machine to it and using it as a dumb monitor. But we understand that restriction is gone with the iMac Pro’s Thunderbolt 3, and Apple isn’t telling us if TDM’s absence here is due to technical, political or engineering priorities reasons.

One literal footnote: where before you had to decide if you wanted a VESA mount to allow you add an iMac to a wall mount or adjustable arm (say, beside other displays), it was delivered with one fitted and couldn’t be switched back to use the more usual foot; with the iMac Pro, you can add or remove the foot and VESA mount yourself.

And that’s in one sense the only upgrade you can make; it’s an iMac! That said, though the RAM is in practical terms not user-upgradable, you can have it upgraded for you post-purchase if you like. (It’s high-end ECC RAM, which is less susceptible to corruption and crashes – significant if you’re talking about the chance for a multi-hours render to screw up.)

There is one more key upgrade thing to cover. Apple’s wager with the iMac Pro is that some people will value the simplicity and appeal of the all-in-one over the tinkerability of a traditional desktop. And given that CPUs are improving at a comparatively slow pace, mixed with the fact that there is a lot of headroom in the iMac Pro’s overall performance, this is probably a generally safe bet. There’s a problem, though: GPU performance is still advancing fast, and with lots of professional creative and scientific applications increasingly deputising compute-heavy tasks to the GPU, having an un-upgradeable GPU in the iMac is a pain.

There’s a solution, though. MacOS now has built-in support for external GPUs connected over Thunderbolt, and though the hosting solutions are currently very expensive, this does at least technically provide a path by which the iMac Pro can avoid obsolescence in years to come as GPUs get more powerful.

There is a bottleneck: though hugely fast in the context of transferring files, Thunderbolt 3’s bandwidth of about 40Gb/sec is significantly less than the bandwidth offered by the PCI-e ports you’d find inside computers. But depending on what you’re doing with the cards, this is unlikely to be an issue at least for the period we’re taking about here, in extending the useful life of an iMac Pro bought today.

Should you buy the iMac Pro?

The ‘trashcan’ Mac Pro was supposed to be Apple’s triumphant love letter to the pro market, but it didn’t work out; we know there’s another Mac Pro attempt in development – a modular system and an Apple-branded display – but in the meantime, we have this, the iMac Pro.

Its demure good looks, even the very we’ve-seen-it-all-before basic design, belie the complete gut-and-remodel work Apple has done inside to create a thermal envelope that can shrug off in such a slim body the great gouts of heat the workstation-grade components kick out.

It’s deeply powerful, but don’t be lured into thinking that just because you’re a creative pro, you need an iMac Pro. If you need it because it will let you do more extreme work in less time, it becomes not a question of whether you can afford it, but whether you afford not to have it; companies like this are likely to be VAT-registered and so can claim the VAT portion – significant in this case! – back. We know you want it. We want it too! But chances are it’s not for us.

Colossal power, monster price tag – but if you actually need that power, your decision to buy is a simple calculation specifically based on whether the iMac Pro will make you more money than it costs