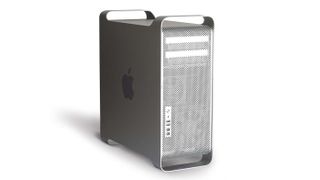 That’s according to our sister site TechRadar, which reports that third-party Mac hardware resellers have been capitalising on hunger for Apple’s long-promised new Mac Pro by offering upgrades and new capabilities to Apple’s 2012 Mac Pro 5.1.

Apple’s redesigned 2013 ’trash can’ Mac Pro – with its single CPU socket and poor internal storage – of course failed to address the needs of many of its users back in 2013. So the appeal of an improved classic Mac Pro tower quickly becomes clear. Sure, the 2012 Mac Pro is limited by which logic board and processor it can accept: but its multiple drive bays and the ability to use modern graphics cards in SLI (Nvidia) or CrossFire (AMD) configurations trump the 2012 Mac Pro.

However, before you reach for your wallet, there are some drawbacks to this solution: namely, that the 2012 Mac Pro platform is, indeed, still limited. TechRadar explains:

“…The absolute fastest processor setup that’s compatible with a 2012 Mac Pro’s logic board is a pair of Intel Xeon X5690 CPUs, a six-core chip with a 3.46GHz base and 3.73GHz turbo clock speed. Considering that modern workstations include chips with 12-cores on a single die that can then be configured in tandem from there, you’re missing out on a lot of speed.”

“Not to mention that this logic board doesn’t support modern features that the work world now thrives on, like Thunderbolt 3 and USB 3.1. Resellers can add these features through third-party parts, which you’d surely pay extra for.”

So what are your options?

Well, you could consider another fantastic computer for graphic design or video editing instead; you could switch from macOS; or you could wait for Apple to deliver on its promise for a new Mac Pro this year.

It’s been almost 12 months since Apple teased a refresh to its desktop computer, saying it was working on an ‘upgradeable’ and ‘modular’ Mac Pro 2018 model with an in-house built display. And in December 2017, a press release reminded us that an overhaul to the Mac Pro was still in development.

The earliest estimates for a release date have the new Mac Pro set to drop in June 2018 – so the choice is yours...

Live deals watch: the best desktop prices from across the internet