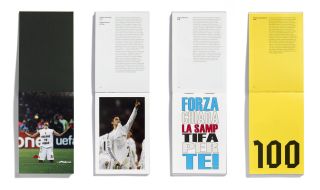 Graphic designers Craig Oldham and Rick Banks have channelled their love for football into a new photography book that celebrates the dying art of undershirt goal celebrations. Named after a famous undershirt message by Ricky Kaká, I Belong To Jesus collects together notable examples of celebrations from the past 30 years.

For those not in the know, undershirt celebrations are those instances where a footballer tears off their shirt after scoring a goal to reveal a personal message underneath. The celebrations are a beloved part of the game for fans, but with FIFA banning players from revealing messages of any kind since 2014, it seems the undershirt's days are numbered.

In the book's introduction, they outline why the practice is still important.  "The elation of celebrating a goal by sharing a personal, intentional message with the supporting masses is one of the last forums of unchecked, passionate discourse in football. A much-needed connection in an increasingly corporate game," the pair reveal.

Divided into four sections (folklore, religion, politics and personal) the photos in the book are accompanied by case studies which help make sense of some of the more obscure or experimental designs found on the t shirts.

The limited edition book, published by Unified Theory of Everything Limited, is more than just a photo collection, though. Oldham and Banks explain that for football fans, they offer a meaningful, nostalgic representation of the game.

“These direct, sometimes raw messages bear the marks of those that made them, and it’s their images that greatly contribute, and build upon, a rich folklore and history that is football,” their site reads. “Without them, the game isn’t simply rid of a singular message, it’s denied the affection of a shared memory."

Football fans and photography enthusiasts can buy the I Belong To Jesus from the book's website.