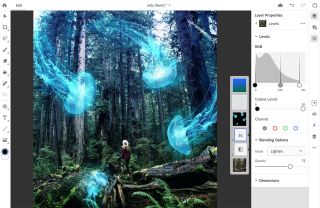 No matter how many great iPad apps for designers are available, there's one glaring omission that holds the iPad back from being an essential portable design platform: Photoshop. Yes, there was Photoshop Touch, but we don't really like to talk about that; what we're all waiting for is a full-fat version – or near enough – of Photoshop CC that we can use anywhere.

Last year Adobe confirmed that it would be delivering a full version of Photoshop CC that enables you to edit PSD files on iPad with the same tools you're used to on desktop. And if you're wondering where it's got to, here's some great news: Adobe is now inviting sign-ups to test the beta version of Photoshop for iPad.

From what we've heard about Photoshop for iPad so far, it's definitely going to be worth checking out. Adobe promises it's going to be the real Photoshop experience, using the same code as the desktop version and featuring all the core tools that you'd expect to be there. 'Core tools' is interesting phrasing; we'll be interested to see if new features such as the updated Sensei-powered Content-Aware Fill make it across to the iPad.

One thing that's certain is that Photoshop for iPad won't look the same as the desktop version; instead Adobe intends to deliver a reimagined user experience that's optimised for touch devices and takes full advantage of the Apple Pencil and gestures. We're keen to see how that pans out.

Assuming you're keen to get involved and be among the first to try out Photoshop on iPad, the application process couldn't be simpler. There's a Google form to fill out, and it only wants to know three things: your name, your email address and a brief explanation of why you want to test Photoshop on iPad. We love that last bit; it almost makes it feel like a competition. So think very carefully about what you're going to say before heading over to fill in the application form.