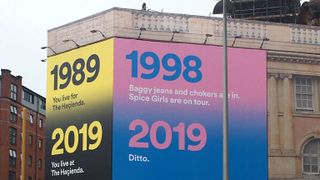 It's scary to think that we're already three quarters of the way through 2019. And as if you didn't already feel like time was slipping away, these funny new ads from Spotify will really ram home the feeling of existential dread.

We've already seen some examples of brilliant billboard advertising, but it looks like we might have to update it with these amazing posters from creative agency Who Wot Why. In the billboards, years are paired up and given humorous captions to highlight how much, or in some cases how little, life has changed.

Just take these examples shared on Twitter by copywriter Vikki Ross. The year 1979 is accompanied with the caption 'London Calling', while underneath 2019 reads 'Conference calling'. The contrast between the famous Clash song and corporate life makes for an amusing juxtaposition, particularly if you remember the punk anthem from the first time round.

As you'd expect from ads for the music streaming service, songs are the central hook of each joke. So, alternative rock band Smashing Pumpkins are played off against 2019's trend for smashed avocados, and 1983's UB40 becomes 'you be forty'.

And while the more things change, the more they stay the same. 1998 was the year of baggy jeans, chokers, and Spice Girls on tour. Fast forward to 2019 and it looks like all three are back in fashion.

Having spotted the billboards in the wild, Ross took to social media to find out more. And in response people flooded her replies with examples they'd seen, the best of which she shared with her followers (below).

This isn't the first time Spotify has amused passers-by with its funny billboards. Previously Spotify's turned users' bizarre listening habits into 2018 goals, while before that it got personal with its 'Thanks 2016, it's been weird' campaign.

Meanwhile, in 2019, Spotify has moved forwards with an app redesign that's centred around its push towards podcasts. And if this has got you reaching for your nearest pair of earbuds, why not give yourself an upgrade with our guide to the best wireless headphones available right now.