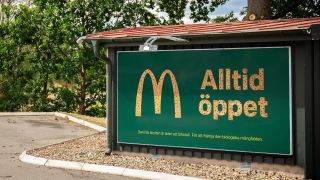 In Sweden, McDonald's has adapted its billboard advertising to make it a little more eco-friendly. In May we reported on the McHive, a tiny McDonald's restaurant for bees (actually a fully functioning beehive), and now it looks like the insects of Sweden will have their accommodation sorted too, with several billboards around the country being converted into mini hotels.

Many of Sweden's wild bees are under threat due to a lack of resting areas. The new campaign includes dedicated wooden billboards with holes drilled into them for wild bees and other insects to make their nests in.

All McDonald's Swedish franchisees have been offered the opportunity to create their own bee hotel billboards and choose their own message. One existing example reads 'Always open' – a clever reference to both the bee hotels and the 24/7 McDonald's restaurants.

Outside Stockholm, another billboard has had six big bee huts added to its reverse side. The advertisement side faces south, and the huts are on the north-facing side, where bees prefer to nest.

The project forms part of a larger initiative that sees McDonald's Sweden working to protect and preserve the country's bee population. Several restaurants have beehives on their rooftops, and there are plans to scale up the new chain of bee hotels in 2020.

Just like the McHive, this project comes from NORD DDB, a creative agency with studios across several nordic countries. For this initiative, the creatives teamed up with outdoor advertising firm JCDecaux.