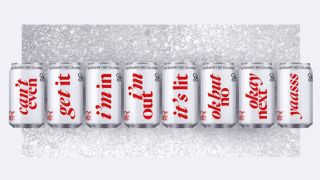 Most of us will remember those Diet Coke ads from the '90s, the ones where all the women in an office rushed to ogle a man with his top off, who happened to be drinking Diet Coke.

Today, man ogling is back in a new spot created by Wieden + Kennedy London. This time, the women are two 'grannies', Vera and Gladys, who are sitting on the sofa scrolling through 'twinge', and texting each other about potential matches (it's not clear what phones they're using, but we'll assume they're some of the best smartphones available).

Gladys sends a picture of Derek, 84, with the text: "I'm in, 100% my type, right?" and Vera swipes to see a picture of Derek with his top off, drinking a Diet Coke. Which is basically another way to say 'Take me, ladies, I'm yours'.

Vera definitely remembers the '90s ad, as she replies: TOTAL PLAYA, with a laugh-cry emoji and a total of four exclamation marks to signify maximum excitement. And while Spanish speakers might read that as 'total beach,' we'll assume it's supposed to say 'player'.

Vera then says, "not looking for long-term though, am I babes?" before doing some grr-ing at the picture of Derek. Yes, you read that right. It's the 1994 advert, but everyone's got older and we're now ogling men on a phone screen instead of through the window. It's a bit like New Coke coming round again.

You can watch the spot in all its glory below:

The ad campaign, named, 'You Do You' comes accompanied with eight limited edition cans, which, according to W+K's website, "celebrate popular phrases including, ‘Can’t even’, ‘Okay, next’ and ‘It’s lit’." There's also a social campaign partnership with Snapchat, where users can choose a Face Lens with the same phrases.

We'll admit it, our first thought was 'what on earth has happened here?' Diet Coke has gone completely off-piste. However, ads that provoke a strong reaction, good or bad, are usually the ones you're more likely to remember. If you've never heard of the "popular phrases", we're gonna bet you're a) over 25 or b) okay we don't really know what else, they're not exactly in our vocabulary either.

On the Coca-Cola website, Tuuli Turunen, marketing manager for Diet Coke, says: “Diet Coke is enjoyed every day and the launch of the new light-hearted campaign to celebrate everyday ‘you do you’ moments from embracing cultural trends to enjoying everyday pleasures aims to encourage our fans to just be themselves.”

So either we're out of touch with mainstream trends, or Coca-Cola and W+K are. We can't even...