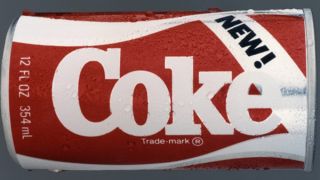 Even the biggest successful brands don't get it right all the time. But the most successful ones learn from past mistakes, and, best case scenario, find a way to use them to their advantage. Coca-Cola is one such brand, as it's now reintroducing a failed product from 34 years ago.

If you haven't heard the story of 'New Coke', let us take a moment to fill you in. Recognised as a brand so strong it doesn't need a logo, Coca-Cola took arguably the biggest risk in consumer history back in the mid-'80s when it changed the formula for its flagship product. The phrase 'if it ain't broke don't fix it' springs to mind. But Coca-Cola did. And it failed spectacularly.

The change marked the first time Coke had altered its recipe in 99 years, and the Coca-Cola website reports it "spawned consumer angst the likes of which no business has ever seen". The backlash was so fierce, New Coke was withdrawn a mere 79 days after its initial release.

A point in Coke's history you'd think they'd want to forget, right? Wrong. Despite New Coke being an utter flop, Coca-Cola is resurrecting the formula following a recent partnership with Netflix's Stranger Things. Set in the summer of 1985, when New Coke was first released, the old-now-new design will feature in various episodes of the third series, giving the show added authenticity. (We can't help but wish New Coke also featured in this epic new Stranger Things Lego set too).

Everyone: I don’t think Stranger Things can get any more 80’s. Stranger Things: Hold my New Coke… #StrangerThings3 #Enjoy pic.twitter.com/xnCGY1dkrQMay 21, 2019

Speaking to CNN Business, Stuart Kronauge, president of Coke's business unit and senior vice president of marketing for Coca-Cola North America, said: "Maybe a while ago we wouldn't have done this. But we're changing and trying to innovate in ways that are beyond traditional new products. This is a cultural innovation." Kronauge also stated the comeback of New Coke is a way for Coca-Cola to "not take ourselves too seriously".

It's a brave move for a brand to resurrect a product that was originally such a monumental disaster, but something tells us things will be slightly different this time around. The ability to recognise and play on a not-so-successful part of Coca-Cola's history shows strength and personality from the brand, which we can't help but admire.

Want a New Coke can for yourself? You can find them at Stranger Things-themed pop-up vending machines in various cities this summer. But you’ll need to be quick. Coca-Cola has produced under 500,000 of the New Coke 12-ounce cans, and we don't expect them to hang around for long.