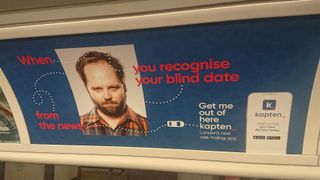 An advert for ride-hailing app Kapten has been taken down from London's transport network after complaints about its appropriateness. The ad shows a photograph of a man, with the words 'When you recognise your blind date from the news', and then 'Get me out of here Kapten'.

As ads go, it's pretty creepy (compare it to our favourite billboard ads to see how it measures up). And the suggestion behind it is even creepier. The assumption is that this blind date is not on the news for fundraising or saving a life, but rather for something sinister, such as rape or murder. Playing on people's fears of personal safety to promote your taxi company? Hilarious.

it’s funny because women might meet a murderer or rapist on a blind date and might need to escape to protect themselves. pic.twitter.com/jsThmQsGreJune 21, 2019

While others pointed out that the perils of such associations.

I think @Kapten couldn't have had any women on their marketing campaign... Many women are already scared of taxi drivers more than their blind dates! Maybe not the best associations to be making with your brand. pic.twitter.com/MPaPjBhsr0June 25, 2019

Goodfellow's tweet was picked up by mayoral candidate and Green London Assembly Member Sian Berry, who asked the current mayor how the advert had got through TfL's approval system at the Mayor's Question Time last week.

I’m asking the Mayor how the hell that happened. It literally jumps at you with offensiveness and there are supposed to be checks. TfL themselves have good adverts on safe travel so how it was missed I don’t know. Grim.June 23, 2019

She pointed out the offensive nature of the ad, and that all adverts that appear on TfL have to go through checks.

TFL has now taken down the ad, and said in a statement: "This advertisement was approved in error and we apologise for any offence it has caused. We are working to ensure that it doesn’t happen again. The advertisement does not meet the requirements of our advertising policy and is being removed from across our transport network. Kapten have also said they will not use this poster in any future campaign."

Campaign reports that this campaign was created by Mr President, although there's no mention of the work on the agency's website or social media.

This isn't the first time adverts approved by TfL have caused offence, and despite the news that sexist ads are now banned in the UK, we can't imagine it'll be the last.