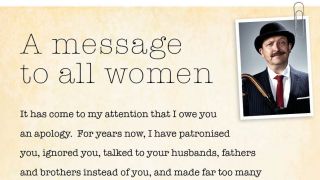 NatWest bank has launched a campaign that apologises to women for having patronised them in the past. But judging by the tone of the campaign, that doesn't look set to change any time soon.

The campaign saw men dressed up as 'typical bankers' in pinstriped suits and bowler hats handing out letters in copies of Stylist magazine to London commuters. The letters apologise for "creating a culture that still, in 2019, has made you feel uncomfortable and unwelcome when it comes to talking about money."

In doing so, the bank has managed to make plenty of people feel uncomfortable and unwelcome, as well as pretty pissed off. The ads won't be making it into our list of brilliant print ads any time soon.

This is the sort of behaviour we might expect from a bank, although that doesn't make it any less disappointing. But one of the oddest things about the campaign is that it's backed by Stylist, a publication that prides itself on providing content through a "feminist lens". That lens, it seems, has become blurred – or perhaps skewed by the subject of the campaign – money.

The front cover of Stylist showed a bunch of flowers containing £20 notes, with a tag saying,"I'm sorry, we seem to have been using sexist imagery and language for the last few decades. But we're changing! Honestly!" However, the use of flowers, and the stereotype this suggests – that all women love them – feels tired and outdated.

Many took to Twitter to express their disgust at the campaign. The word 'patronising' came up a lot.

This is the MOST PATRONISING piece of rubbish. Is having 500 women business specialists a USP? What is a USP is having bias-free male business specialists. We suggest @NatWest_Help takes our bias training or asks female creatives to work for their brand. Who did this work?May 22, 2019

Oh THANKS @NatWest_Help . FINALLY I can get my little female head around the lofty world of finance...#mrbanker pic.twitter.com/ySi7fHbpUQMay 22, 2019

Others were 'disappointed' by the campaign...

What a disappointing start to the morning. You all know I'm loud with my #financialfeminism drum. And if you want to know why, look no further than the new #MrBanker campaign from @NatWest_Help and @StylistMagazine. pic.twitter.com/AaQT6ivR3HMay 22, 2019

While some wondered who the bank was trying to target...

#mrbanker @NatWest_Help Is this a joke? I thought it was and then saw that @StylistMagazine endorse it. This is insulting, clearly written by men and highlighting a lack of #equality awareness. I manage my family’s finances as do many other women. Who are you appealing to?! pic.twitter.com/xJmMPYnvguMay 22, 2019

To its credit (or was it its detriment?), NatWest kept on replying.

Hi Nathalie, thank you for sharing your views on this, we will share them with our Marketing team,. We know that we can always do better which is why we’ve launched the Woman’s Worth Collective with Stylist and we welcome feedback from customers on what they want and need. 1/2May 22, 2019

The campaign was created in response to research by YouGov, which found that 83 per cent of women feel banks don't make products easy to understand. The same survey found that 79 per cent of men felt the same – so it's not totally clear why the bank felt the need to target women in particular.

NatWest aims to help women feel more confident when talking about their finances. Sadly, this effort at doing feels misjudged, and frankly, a bit embarrassing. If it really wanted to talk to women, why did NatWest draw on an age-old stereotype of Mr Banker to do so?

You can read more about the campaign on the NatWest website, and on Stylist.