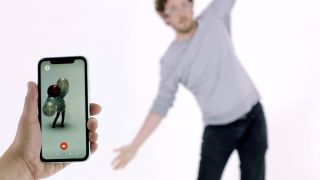 With lockdown restrictions continuing to ease in several parts of the world, many of us will be wondering whether we can actually remember how to socialise. Luckily, there's a new app in town that's guaranteed to inject some extra fun and conversation into your next socially distant meet-up.

Created by remote-working collective Universal Everything, Super You is a "costume arts experiment" which uses the power of AR to deck its target out in 11 different abstract costumes. The only catch is that it isn't compatible with Android – you'll need a fairly up-to-date iPhone (so it's a good time to check out these huge iPhone 11 deals). We tried it out and found our new, bulbous outfit rather fetching:

Super You is extremely simple to use – all you have to do is open the app, point the camera at your friend and the body tracking technology (Apple ARKit 3) will do the rest. Swiping from left to right will allow you to switch between costumes consisting of various blocks, blobs, squares and spikes.

With many AR experiences (such as Google's new virtual dinosaurs) focussed on realism, it's a treat to see an app show off the tech's potential for the artistic and surreal. Universal Everything provides some tips for getting the most out of the app, from wearing bright clothing to "moving gracefully" (as if we don't always).

Super You is part of the collective's Future Humans series, which explores the human touch that can be found in AR. “This project combines our fascination for mixing timeless figurative representation with emerging technologies to create new forms of soulful digital expressions," founder Matt Pyke said in a press release. "By democratising the artwork through releasing this app to the public, we look forward to seeing the crazy, funny, inventive unexpected results”.

To use Super You, you'll need an iPhone with either an A12 or A13 chip – which means any iPhone from 2018 onwards. Take a look at today's best iPhone 11 deals below.