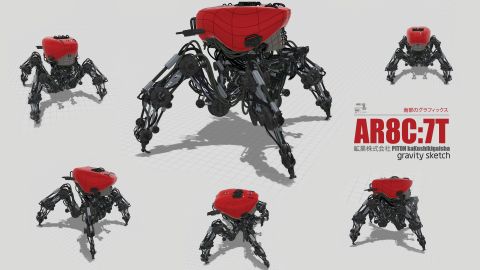 This VR software will appeal to anyone wanting to quickly draft out their ideas without needing to learn a huge amount of commands.

What designer hasn’t thought about bringing their 3D art to life in the air in front of them? In the last few years we have been able to do just that, at least inside a VR head-mounted display and with controllers in our hands.

Gravity Sketch started life on an iPad and was followed by the VR version which can now be experienced in an Oculus Rift, HTC Vive and the Microsoft Mixed Reality headset. There’s a basic version with some limitations (only four layers, limited exports etc) and a subscription model to access the full feature set.

Unlike a lot of the other VR creation tools that have cropped up, Gravity Sketch is much more like a NURBS-based design package: more like Rhino than ZBrush. There’s no sculpting with Voxels yet but that’s not really what it’s all about. This tool is aimed at designers who are used to curves, patches and manipulating geometry with control vertices (points). The vast majority of designers who started posting work online were from an automotive or design background and that is reflected in the sort of work that is being produced. A designer can literally sketch out the frame of a vehicle with strokes in the air and then patch those strokes together with editable surfaces.

The basic toolset found on your main drawing hand controller includes Ink, Strokes, Revolve, Curved Surface, Volume and Primitives. While that doesn’t sound like a huge list, it pretty much gives you what you need to make anything. The Ink and Stroke tools enable you to paint strokes in the air and they are either ribbon like or made from a shape. In addition to that, you can taper and even edit the control points once you have drawn out the stroke.

There is a full colour wheel at your disposal and strokes can be painted in your chosen colour and edited afterwards. The Revolve tool is a lathe of sorts and by dragging out a stroke or clicking points you can create wheels, cylinders, jet engines and the like. Again, after the initial shape is created with a single click you can go back in and edit the control points to refine the design.

Curved Surface allows you to click in two places in space and a surface will be created in the space between. By dragging from there you pull out sheets of geometry to create your surfaces. In edit mode you then snap those points to the strokes you’ve already made and in that way build up your design.

Volume replaces Filled Surface and is a way to create a volume of geometry by clicking or drawing out a shape. Add to that primitives like sphere, cube and triangle and you have a pretty all-encompassing creation toolset. There’s also some pre-made mannequins that you can build around.

Version 1.5 was released in September and brought in a raft of new features the community has been calling for. For example, Group/Ungroup helps to keep your scenes organised, and Bridge Canvas brings the ability to stretch a surface between strokes and means you can quickly build up a model with a lot less cleanup.

As mentioned, the Volume tool improves on an already existing Filled Surface tool, and SuperEllipsoid adds more functionality to the primitives meaning you can hit more complex shapes quickly. There’s also a new Orthographic Viewport, tapering options for strokes and the ability to edit normals which means you can actually rotate parts of a stroke to make them more visually appealing.

Gravity Sketch: Is it for you?

This software will appeal to industrial designers, product designers, technical illustrators, concept artists and anyone wanting to quickly draft out their ideas without needing to learn a huge amount of commands and tools. It might not be for you if you want to focus on 3D printing, as the surfaces generally aren’t sealed ready for print without lots of post work. It doesn’t mean they can’t be, but there’s definitely lots to do to make an exported model print-ready.

One thing that will surely be in coming releases is the ability to edit and remove parts of a curved surface. Things like fillet, chamfer and Booleans must be on that list and that will make an amazing piece of software even better.

If you design for a living and are looking for new ways to explore your ideas, then take a look at Gravity Sketch. It’s an affordable way to design in VR. If you are all about sculpting, painting or 3D print-ready models then look elsewhere (for now!).

This VR software will appeal to anyone wanting to quickly draft out their ideas without needing to learn a huge amount of commands.