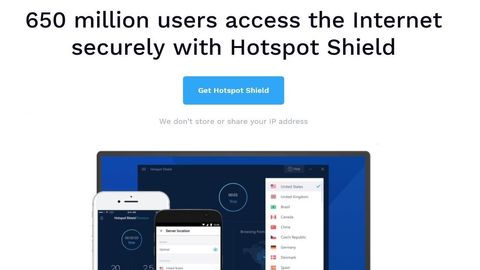 Hotspot Shield is a valuable companion for anyone trying to access Netflix or Hulu, as well as engage in some torrenting. However, should you choose this provider, you need to accept the fact that it is based in the US, which means there’s no guarantee of full anonymity, and the range of supported devices is limited.

Hotspot Shield is a VPN platform developed by the US-based cybersecurity firm AnchorFree, which started out as a free sponsored Wi-Fi hotspot provider. Hotspot Shield is currently the VPN provider of choice for around 650 million people around the world, and is one of our picks for the best VPN in 2019.

Hotspot Shield has a rather generous money-back period. Specifically, if there is anything wrong with the service, you can ask for a refund within 45 days of signing up for a subscription

Hotspot Shield is available for free and as a paid version. The free version is supported by ads and limits the daily data transfer to 500MB. Free users also have a more limited choice of servers than the paid ones.

This VPN vendor also offers subscriptions for businesses with prices that start at $19.99 (about £16) per month.

Accepted methods of payment differ depending on your current location and include credit cards, PayPal, Alipay, Neosurf, Mint, gift cards, and more.

In case you want to test the service out before committing to any of the paid plans and the free version isn’t enough to do so fully, a seven-day free trial is offered. This trial is available if you sign up for any of the paid plans, except you aren’t charged during this period. If you want to avoid being charged, you need to cancel the subscription within seven days of signing up.

Hotspot Shield offers its services on over 2,500 servers distributed across 25 countries around the globe. Virtual locations are available in 70 countries. The availability of the servers depends on the device used, with iOS users having access to the highest number.

One of its industry-standard features is a kill switch, a powerful safety mechanism put in place to protect your sensitive information from outside snoopers. It activates whenever your VPN connection drops, effectively blocking all internet access on your device. Although this tool isn’t available on mobile devices, Android users can make use of their device’s own integrated kill switch.

One Premium VPN account allows you to connect up to five devices at the same time. Unlike with other VPN providers, this number cannot be bypassed as Hotspot Shield doesn’t support installation on routers.

Hotspot Shield offers strong anonymity protection with the help of its proprietary Catapult Hydra technology. It uses this technology instead of commonplace protocols like OpenVPN, PPTP, etc because Hotspot Shield deems it safer and sturdier. This seems to be the shared view of other companies that employ Catapult Hydra  for their own VPN provision, such as BitDefender and McAfee.

This technology is based on TLS 1.2 and utilizes different algorithms for the purposes of connection, authentication, client connections, and payload data exchange within the VPN tunnel. It uses an unusual combination of AES-128 and AES-256, along with the Elliptic Curve Diffie-Hellman (EDCHE) algorithm for Ephemeral Key Exchange. Ephemeral means that encryption keys are generated for every new user’s session and erased from memory when the session is over.

Hotspot Shield promises not to collect, store, or share information that can be used to identify you, including IP addresses. The company states it doesn’t retain any activity logs either. That said, these claims cannot be properly verified without an independent public audit, something that several other VPN providers have conducted.

Hotspot Shield is registered in the United States, a country with a somewhat poor reputation concerning the invasion of individuals’ privacy. This means that, if a government agency asks, Hotspot Shield will probably hand over any information demanded because it is subject to US laws.

On top of that, the provider has been accused of spying on its users for its own gain. Namely, the Washington DC-based Center for Democracy & Technology said in 2017 that Hotspot Shield had been tracking its users’ activities, redirecting their browsing to its targeted advertising partners.

Another privacy-related incident was recorded in 2018 when a flaw in the platform was found, leaking portions of users’ information such as the country of their location and Wi-Fi network name. The problem has since been fixed, according to the company.

Hotspot Shield’s performance will satisfy even the harshest critics. The connection is stable and speeds are excellent on all of its servers, even those far away from one’s current location. This is especially important if your priorities are unobstructed streaming and exchanging of large files via torrenting clients.

Hotspot Shield's high speeds and connection stability allow for unconstrained streaming, especially so when accessing geographically restricted services like Netflix and Hulu. Although not all such services are available at the moment, the website assures they will soon become accessible through the company’s platform.

All of Hotspot Shield’s servers are P2P-optimized, which means they fully support unlimited torrenting.

Clients are available for Windows, Mac, Android, iOS, and Windows Phone, while Chrome and Firefox are covered by browser extensions. This is as far as the platform support is concerned due to the utilization of the Catapult Hydra technology.

The clients are easy to install and use, even if you’re a beginner. Even so, should you encounter any difficulties, the website has guides you can consult or you can try your luck with the customer support.

Besides the detailed support section on the website, Hotspot Shield has a team of experts to help you out with anything you need. You can contact them via live chat or email, although you might need to have some patience as they are not always immediately available due to the sheer volume of the provider’s userbase.

Hotspot Shield is a valuable companion for anyone trying to access Netflix or Hulu, as well as engage in some torrenting. However, should you choose this provider, you need to accept the fact that it is based in the US, which means there’s no guarantee of full anonymity, and the range of supported devices is limited.