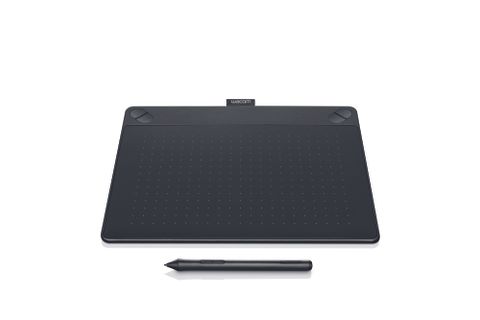 A great starter tablet for the inexperienced, budding comic artist, but pros should look elsewhere.

The Intuos Comic medium is a reasonably priced entry-level tablet from the gold standard of graphics tablet makers, Wacom. The main difference between this Intuos Comic and its smaller 2015 predecessor is that the upgrade in size simply offers more space to draw, which is beneficial on higher resolution screens. It remains a lightweight yet sturdy piece of kit.

The answer to whether you want this tablet or not depends on if you’re a hobbyist or if you’re a professional – or an aspiring one! The Intuos Comic lacks a few of the useful features of its big brother, the Intuos Pro, such as an eraser tip on the stylus, or a well to stand your stylus in.

The Comic offers 1,024 levels of pressure sensitivity. While this is half the sensitivity levels boasted by the Pro and lacking tilt sensitivity, it still feels highly responsive and is a joy to use.

The Comic also has multi-touch, which enables you to use common gestures to zoom, rotate and pan your artwork. Sadly, it only features four programmable ExpressKeys, which are by default set as your modifier keys, and although these are useful, if you’ve used other Wacom tablets before then you’ll miss additional shortcut keys and touch strips to modify your brush size quickly. It’s not a problem if you have your keyboard nearby, but between this and the inability to flip your pen and use it as an eraser, you’ll notice your workflow productivity being hampered.

The Intuos Comic supports the Wacom Wireless Kit, but it doesn’t come included as it does with the Intuos Pro. The cable feels long enough that this shouldn’t be an issue, though.

If you’ve never used a tablet before, or are just after a cheap and reliable model, this is a good way to get a feel for how they work. However, you might be better served with the cheaper and smaller Intuos Comic. More experienced artists won’t want to be hamstrung by the lack of an eraser, ExpressKeys and tilt sensitivity, and are best suited opting for one of the more expensive models like the Intuos Pro.

A great starter tablet for the inexperienced, budding comic artist, but pros should look elsewhere.