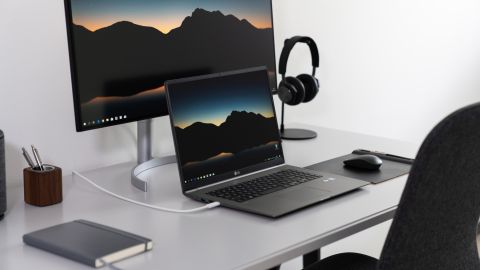 The LG Gram has a lovely large screen, enough performance for graphics work and is incredibly light. There’s no other laptop really quite like it, and it’s not extortionately priced either.

The LG Gram 17 achieves a technical feat that has so far proven elusive with the vast majority of laptop designs – it combines ultra-light weight, slim design but also really good performance when it comes to creative software.

It's available in four screen sizes ranging from 13.3-inch to the largest 17-inch version we're reviewing here, which amazingly only weighs 1.34kg and is touted by LG as the world’s lightest 17-inch laptop.

At time of publish, the LG Gram 17" is not yet available in the UK.

Shaped in the familiar wedge that was popularised by the MacBook Air, the LG gram 17 measures just 1.7cm thick. This combination of thin design and light weight makes it exceptionally portable and fantastic for working when on the move. Despite its large physical size, it can be lifted with one hand and passed around like a tablet. It won’t add much weight to hand luggage (although the dimensions will make it a squeeze in smaller bags) and thankfully, it comes with a diminutive charger too.

It’s great to see, because in the past, 17-inch laptops have been the very opposite of portable, especially those that have hardware that’s capable enough to run the best photo and video editing software.

The LG Gram achieves this feat of extreme weight reduction through the use of a special mixture of carbon and magnesium for the chassis, and ultra small internal parts.

Inside the 17-inch LG gram is a low power (15 watt) quad-core Intel Core i7-8565U processor, that runs at 1.8GHz normally but leaps to 4.6GHz when running complex processing tasks, such as a complex filter or video export.

There’s a 512GB SSD and 16GB of memory, a specification that will be more more than suitable for the majority of creative professionals. It’s up to the job of processing RAW images, multi-layered photoshop work, editing 1080p video and crunching through the most demanding filter effects in creative software.

The gorgeous IPS display is WQXGA (2560x1600) resolution, which is a 16:10 screen ratio. Bezels around the side are only a few millimetres, providing (close to) edge-to-edge viewing. The 17-inch screen has been squeezed into a 15.6-inch body thanks to this bezel shrinking.

It isn’t 4K, but is great for accurate graphics work with 96 per cent sRGB coverage. It has a glossy finish with a plastic film on it, so don’t expect to be able to use the gram outdoors on a sunny day, but otherwise it looks particularly good, with high brightness and very good contrast. And its beautiful screen means that photo and video editing on the LG gram will be a fantastic experience.

The smaller versions of the LG Gram have slightly less generous specifications. You get a 256GB SSD and a Core i5 processor in last year’s 14-inch model, for example.

One glaring omission from the specification is any kind of discrete graphics card from AMD or Nvidia. It’s understandable, a graphics card would add weight and need more cooling, making it impossible for LG to create such a thin laptop. Instead, you’re stuck with the integrated Intel UHD 620 graphics chip.

In creative software, that means you won’t be able to use Nvidia’s Cuda acceleration, and while OpenCL will work, it’s not as good as using a discrete graphics card. That’s not to say the integrated Intel UHD graphics is completely impotent. You can still run 3D applications, but the LG gram is a system for 2D design, rather than high-end 3D.

The options to customise the specification are limited as well. LG says there is scope to make some changes, with an extra memory slot (although 16GB is quoted as the maximum supported memory capacity) and space for a second SSD, but it appears these are not an option when purchasing.

There are a few quirks with the design too. Although the base and hinge are solid, the screen wobbles all over the place in use, and the SATA SSD is not as fast as the nVME SSDs supplied in other manufacturer’s high-end laptops.

Beyond those limitations the LG gram 17 is still one seriously impressive piece of engineering. When the CPU is being put to good use with the right software, it can deliver excellent performance. Basic Windows tasks, from web browsing to movie watching, are quick and responsive and the 72Wh battery is quoted for 19 hours of basic use.

They keyboard is shallow with great travel, with an included number pad, and we found it easy to hammer out words on, while the generously sized trackpad is smooth and accurate. Ports on the side cater for a fair amount of peripherals – you get three legacy USB connectors, with a single USB-C port as well that supports Thunderbolt devices.

A MicroSD card slot lets you transfer media from cameras, phones and so on, an HDMI port can output the image to a larger display and a fingerprint scanner is built into the power button. Audio is the weakest point in the design, it sounded a bit tinny to our ears.

The LG gram 17’s performance is only relative to its size and weight, held back slightly by the low-power processor. With competitors such as the MacBook Pro and Dell’s XPS 15, you can get faster processors, discrete graphics, more storage, more memory and an even higher resolution display as optional extras, all of which are superior for design work.

For example, the top-end Lenovo Thinkpad P1 can be kitted out with a brilliantly vibrant 4K display, six-core processor, a really powerful Nvidia Quadro P2000 graphics card, up to 64GB of memory and 2TB of SSD storage, while still remaining extremely portable. Admittedly though, it costs a lot more than the LG gram.

The LG gram 17 is quoted as $1699. Official pricing in the UK has yet to be announced, however we expect it to be in the region of £1300, which, when considering the cost of some alternatives, is not particularly extortionate given the large screen and decent all-round performance.

With the LG gram 17 you have one of the thinnest and lightest general purpose laptops on the market, and one that is absolutely up to the job of working with creative software. That said, the lack of any graphics card could prove to be restrictive if you find yourself in need of more complex programs. We’d pick it for the portability first and foremost, as it means never again having to feel bogged down by a heavy computer when travelling, but it’s definitely not a mobile workstation in the way some competitors are.

The LG Gram has a lovely large screen, enough performance for graphics work and is incredibly light. There’s no other laptop really quite like it, and it’s not extortionately priced either.