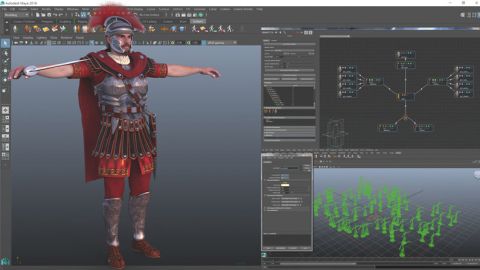 Last time we looked at Golaem Crowd, we liked many of the new features this Maya crowd simulator had implemented, despite it being a fairly strict taskmaster. Golaem 5 promises easy retakes and better artistic control. So does it deliver?

Used in crowd simulations ranging from Guitar Hero Live to many of the crowd scenes in HBO’s Game of Thrones, Golaem Crowd – a Maya crowd plug-in based on physical and mental crowd interaction pipelining into Maya’s particle flow tools – was recently released. It lets you create virtual, particle-based crowds able to react in, and to almost any environment. It’s a release based on user feedback, like requests for greater ease of use and enhancements enabling a better, faster workflow. It seems the Golaem team have delivered.

The standout feature is the new Layout tool. Available bundled with, or as a stripped, previz version of Golaem itself, it can fit into non-Maya pipelines. GPU-based and utilising native, generic Maya components, such as move, translate, rotate, duplicate and layers; this tool allows you to edit a scene’s components after saving the simulation cache. This is very handy in smaller scenes or scene-segments which need no, or little AI, as it can shave hours off the tweak-resimulate-rinse-repeat work cycle. The tool saves you from rerunning an entire simulation for even minor tweaks on an outfit, pose or action, allowing you to manipulate, re-outfit, or retime animations or animation events post-simulation.

Building on last year’s implementation of Dynamic Triggers, the Trigger Editor’s enhancements mean a less finicky way to use sequencing triggers. This means it’s easier to separate and generate unique behaviour trees for instances in the crowd, by using your own, or preset components from the library for start and stop behaviours.

However, if you’re going to use the Trigger Editor extensively, it still helps knowing your way around (MEL)-scripting, especially if those behaviours are put into a set with assets using another new feature in Golaem 5: Blind Data.

Experienced users know Golaem previously only supported joint, blendshape and geometry cache animations. Blind Data allows you to extend this; you can now import items such as muscle or morph deformers. It does this by letting you register any animation, even custom nodes in a character and motion file into the exported cache. If you’ve set up parts of a mesh for skinning in order to fit into Golaem, you know what a timesaver this can be, despite its somewhat onerous process.