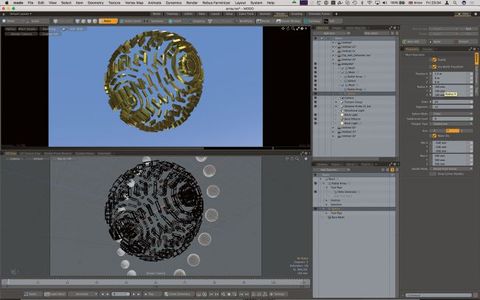 Modo 1.2's new features are a welcome addition, but new users will find it all a bit of an uphill struggle.

With this third and final instalment in its Modo Series, Foundry has tightened up the ship with a range of improvements to some of the core toolsets within Modo: mainly its procedural modelling capabilities.

MeshFusion, the unique boolean modelling system, has had a major overhaul. It now sports a much more intuitive UI, which doesn't rely on the old tree system (for power users, the schematic view is still available). Instead there is a clear set of icons that denote mesh use, whether it's to be a Primary (visible) or Subtractive Trim or Intersect Trim.

Meshes can also be combined into a new Compound Trim item that can be used to cut away another mesh while keeping the component parts live. This makes it possible to create very complex models that can be made airtight for 3D printing very quickly, with none of the frustration of the previous control system, which felt like it could break at any minute.

Topology tools have also been enhanced with a new Automatic Retopology tool, which can reduce complex meshes to a set number of quads. While not as intuitive as similar tools in ZBrush, for example, these are a valuable addition, along with the new Retopo Guides that can help flow the polygons into the correct position (especially critical for models that are to be animated).

Speaking of animation, deformers can now be cached, which makes a huge difference to animation playback speed. For power users, Assembly Alias Presets can be created, allowing interactions such as rigging, which have been created in the schematic view and can be shared with others.

One of the big features for Modo 10.1 was the addition of a new procedural modelling system, this has been enhanced in Modo 10.2 with new slice tools and duplication options. One such option is Radial Array, which when combined with the tools provided in Modo 10.1 can create some really compelling geometry.

Rendering and lighting have been improved with the addition of a new Mesh Light item, which when combined with a piece of geometry creates a Light object with it. This provides a more efficient, predictable and straightforward way of lighting with meshes than was previously possible with luminous textures.

All in all, Modo 10.2 is a solid release, but it still skirts around a lot of Modo's core issues. While the UI definitely feels a lot smoother to use, there is a definite learning curve to the new toolsets, and with the strides that Autodesk is making with Maya to make the once-horrendous UI a lot more straightforward for new users, as well as Maxon's famed ease-of-use for Cinema 4D, other than the welcome addition of the new MeshFusion control method, there is little in the way of streamlining processes for new Modo users, which is disappointing.

So has the three-stage, staggered release of Modo 10 been a success? While a lot of the new features that have come along are really useful for existing Modo users, and enable them to get into more markets and create more compelling art, it is hard to recommend Modo 10 – even at the comparatively lower price – to new artists seeking an all-in-one digital content creation app. This will change once the viewport speed and general friendliness of the application are enhanced, and brought up to par with its competitors.

Modo 1.2's new features are a welcome addition, but new users will find it all a bit of an uphill struggle.