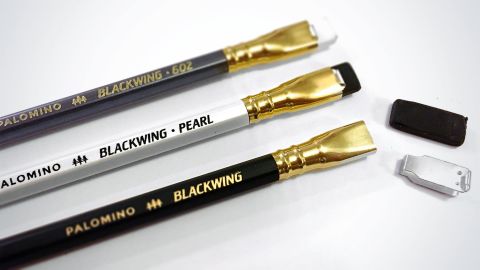 Blackwing's quite a name to live up to in the pencil stakes, but Palomino has done it proud with these superb offerings.

The name Blackwing has a long history in the pencil world – the brand is know for producing some of the best pencils on the market. Originally made by Eberhard Faber starting in 1934, the pencil soon became a staple among writers and artists. Chuck Jones and many Disney animators were known for their devotion (Shamus Culhane was buried with one). The pencils soon developed a bit of a cult following and when Sanford (who bought Faber-Castell, who bought Eberhard) stopped making them in 1998, they shot up in price on eBay with pencils regularly going for £40 or more.

In 2010 Palomino purchased the Blackwing brand and started manufacturing a new line.

Not including the special limited editions that the company occasionally release, the three main options for the pencil are the Blackwing, Blackwing Pearl and Blackwing 602. The latter being closest to the original, according to Palomino. The Blackwing is the softest, then the Pearl, then the 602. We would compare them to 5B, 4B and 3B pencils in value.

The Blackwing leads have wax added to them, making them very smooth to write and draw with. They are capable of dark velvety marks but hold their point longer than other brands of similar lead hardness. We have gone through several and haven't found any annoying burrs or imperfections in the leads. The quality of them feels high, from the lead and wood, and the paint on the outside to the unique flat ferrule. The eraser in the pencil is unusual as it is rectangular (which keeps it from rolling) and replaceable. The shape is more useful than a traditional round eraser and you can buy replacements in different colours.

For anyone who enjoys discovering new tools and materials, the Blackwing could soon become a firm favourite. The smooth lines, high-quality materials and rich black marks will appeal to all artists.

Blackwing's quite a name to live up to in the pencil stakes, but Palomino has done it proud with these superb offerings.

Topics
Art
Paint and Draw
Get Weekly Tips and Inspiration