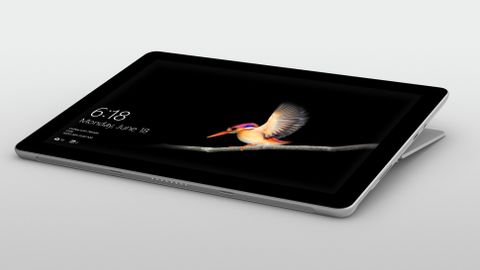 The Go’s digital inking support just keeps getting better, and – despite the poor battery life and lack of gaming capabilities – the Go is a serious player in the increasingly competitive market of hybrid devices.

We came to the review of Microsoft’s all-new Surface Go with a simple question in mind: is this a product for people working in the creative industries? But before we can answer it, we need to take an in-depth look at what’s on offer in Microsoft’s smallest and cheapest 2-in-1 laptop to date.

The first thing to mention about the appearance of the Go is its diminutive size. At just 10 inches, it’s a new form factor for the Surface, and it goes head-to-head with the standard iPad. Also new to the Surface line is a smoother bezel around the edge of the device, which makes it far more comfortable to hold in the hand, especially given its weight of just 0.52kg (0.77kg with the Type Cover attached). Although the base Surface Go can be bought for £379, to unlock the device’s true potential you will need to spend some more money on the additional Signature Type Cover, and throw in a Surface Pen for good measure.

Let’s start by looking at the Signature Type Cover, which is priced at £99. Coated in Alcantara – a microfibre material used in high-end car interiors and the like – the Signature Type Cover keyboard boasts a premium look and feel, whilst also being extremely durable. And the functionality of the keyboard is of an equally high standard: the trackpad is responsive and accurate; the keys have just enough travel distance; and swipe gestures are fully supported.

The cover connects via a magnetic coupling, and when it’s attached you can either lay the keyboard flat, place it at a slight angle for more comfortable typing, fold it behind the device to use it in tablet mode, or use it as a screen protector.

The Surface Go’s PixelSense touch display boasts punchy colour, decent brightness, and a 180-degree viewing angle. Embedded within the 1800×1200 resolution display you get front (5MP) and rear-facing (8MP) cameras, as well as a pair of 2W stereo speakers, which provide surprisingly good separation, and come with a Dolby Audio Premium.

As with other Surface devices, on the reverse of the unit Microsoft uses a metal kickstand to support and angle the device, which gives a huge amount of flexibility. These are impressive features, but we’ve left the best until last, and that’s how the device performs with its companion stylus.

The Surface Pen (sold separately for £99) is the recommended stylus for use with the Surface Go, and whilst it is a little too expensive, we can’t imagine using the Go without one. Built on Wacom’s Penabled technology, and latterly on N-Trig technology, the Surface Pen has gone through four generations, and in its latest incarnation it can detect 4096 levels of pressure, which – despite being about half of what you get on a top-end Wacom pen – is still suitable for all but the most demanding users. On top of this, you also get over 1000 levels of tilt response. And with just 21 milliseconds of latency, the Surface Pen is now, according to Microsoft, "the fastest digital pen on the planet”.

Surface Go: Under the hood

Under the hood, the Surface Go is powered by a dual-core 1.6GHz Intel Pentium Gold processor and an Intel HD Graphics 615 graphics card. And whilst the base model includes 4GB of RAM and 64GB of eMMC storage, the device we tested is the 8GB version (with 128GB of SSD storage), which is priced at £599. This test device performed well across all but the most intensive uses. And we were delighted to see that Microsoft has retained the MicroSD slot in the Go, as with previous Surface models, enabling you to easily expand your storage.

What can the Surface Go handle?

Whether you’re jotting down thoughts and sketches in OneNote, creating prototypes in Adobe XD, or making vector art in Affinity Designer, the experience is a good one. However, we did find some brush stutter as loads increased, and whilst the Go is great for basic inking and sketching, we wouldn’t recommend it for more complex projects. (For example, Adobe Photoshop and Affinity Photo take around 20 seconds to open, with a RAW photo taking around 30 seconds to import.)

For apps such as Word, Chrome, Excel, and OneNote you really don’t notice any dip in performance with the Surface Go, and we were surprised at just how capable it is – especially for the price.

One place where it’s hard to make compromises is gaming, and this is an area where the Go performs poorly. Taking Fortnite as an example, even with the lowest screen resolution, and all details dialled down, it’s still borderline unplayable. Minecraft fares better – which you’d expect – but any game with requirements beyond this is going to struggle.

Out of the box, the Surface Go comes loaded with Microsoft’s Windows 10 Home in S mode. (For those not familiar with S mode, it’s a specific version of Windows that only allows you to install apps from the Microsoft Store.) This provides better performance and security, and is geared towards an educational setting, where you don’t want third-party apps being installed on the device. However, switching to the standard Home edition can be done in a few clicks, and we experienced no issues when doing so. Once you’ve switched out of S mode, though, there’s no rolling back– so be aware that it’s a one-way street.

Is the Surface Go perfect? Not quite

If there’s a chink in the Surface Go’s armour, it’s the battery-life. Despite an advertised nine hours of juice, we struggled to stretch it past seven, and this was with relatively lightweight tasks such as web-browsing and word processing. So that sucks. But on the bright side, it charges quickly, and you get a full battery in around two hours, which trounces the 4 hours that it takes to charge a 9.7-inch iPad Pro. And whilst this poor battery life might not be a deal breaker – because the Surface Go does so many other things so very well – it might be enough to make you think twice. But it’s our only gripe, beyond a lack of serious gaming chops, which even the harshest of critics would forgive in such a low-priced, and otherwise excellent laptop.

The Go’s digital inking support just keeps getting better, and – despite the poor battery life and lack of gaming capabilities – the Go is a serious player in the increasingly competitive market of hybrid devices.