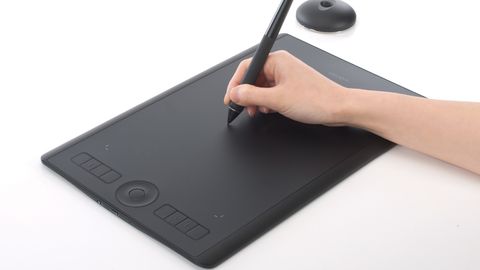 This is without doubt a worthy purchase, but there are a few niggles that Wacom could address.

When unboxing Wacom’s Intuos Pro  medium, our first impressions were a mix between thoughts about how great the tablet looks, and concerns over how long it will stay that way before becoming marked, scuffed and worn. In the box, you’ll also find the Wacom Pro Pen 2, a stand, four coloured pen rings and a cable.

Documentation mainly consists of a couple of diagrams showing how to use the stand, which conveniently houses both the nibs and can be used to extract a nib from the pen. Lastly there are samples of rough, standard and smooth texture sheets. The sheets (sold separately) stick to the tablet work area, replacing the existing surface with a new texture, allaying fears of marking the tablet.

The backing is of the ‘peel-off- and-throw-away’ variety, which is problematic if you chose to peel it off to switch between textures. It would prolong the pen nibs’ lifespan if the tablet shipped with the default smooth surface applied.

Setting up the Wacom Intuos Pro

Before use it’s necessary to install drivers and firmware updates. Once done, you’ll want to open a Wacom account then hop into the Wacom Desktop centre and fine-tune how the tablet functions to your preferences. Ignoring the fairly pointless setup wizard, the other options provide a wealth of useful customisation tweaks, including: on-screen controls; orientation settings that are ergonomically designed for left and right-handed artists; touch settings for multi-touch gestures to navigate around your project; and ExpressKeys and touch ring functions, providing handy shortcuts that during testing became preferable to keyboard hotkeys for speed.

It does take time to adapt to the many features the tablet is capable of, which underlines its suitability for professional use and fast workflow.

The medium version sports a slightly smaller physical footprint than its predecessor and yet gains a larger active area. Depending on your desk size you could place it alongside your keyboard if you prefer not to use the ExpressKeys and touch ring. However, taking advantage of these time-saving features and shortcuts is far more productive. It’s also wireless, with Bluetooth 4.2 helping you to declutter your desktop and work from your sofa.

The Wacom Pro Pen 2 is incredibly responsive but feels slightly too sensitive with the default settings. Once set up, it does provide a very natural feel when drawing concept designs, texture painting and sculpting, and it performed well in Photoshop CC, Painter, Mari, Maya and ZBrush during testing, although that was after a few hours of getting used to it.

There is very little noticeable lag, which can be a problem with cheaper tablets, and the pen is comfortable in your hand for long stints, providing superb pressure responsiveness and giving you innate control and precision for detailing.

Tilt recognition and 8,192 levels of pressure come into play the more you use it and the levels are a noticeable gain compared to cheaper tablets on the market. Being 13.2 x 8.5 x 0.3 inches and lightweight, it's ideal for freelancers on the go, and the battery life is reasonable, allowing for a full day’s work.

The Pen’s stand, however, doesn’t grip the Pen suitably and is prone to being knocked over easily. It can be laid flat, but this doesn’t really solve the issue. Inside the stand base you’ll find the nibs; to open it you have to twist the base, but there isn’t much grip to make this an easy process and it’s quite stiff to open until it has been worn in.

This is without doubt a worthy purchase, but there are a few niggles that Wacom could address.