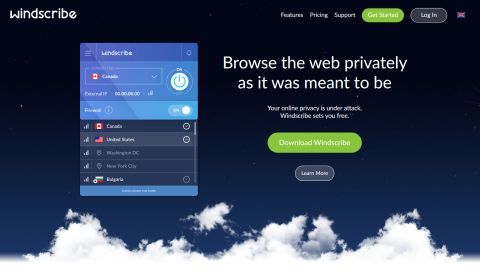 Windscribe is a superb VPN service that offers plenty of usual and unusual features, such as customizable pricing plans, various blocker options, importing of custom OpenVPN configuration, and browser-only options for an extra level of privacy.

Windscribe is a VPN company established in 2016 in Richmond Hill, a city in south-central York Region in the Canadian province of Ontario. Its VPN platform offers a very impressive collection of features, plus flexible pricing plans, making it one of our recommendations for the best VPN in 2019.

The provider’s free plan comes with a 10GB of available monthly traffic. If your requirements exceed this limit, then two paid plans are available by default - the one-month and the one-year option, at $9 (about £7) and $4.08 (about £3) per month, respectively.

Windscribe also allows you to create your own plan, purchasing only the servers you want for $1 (about £0.80) a month each. The only condition is that you purchase at least two locations. Each location you select adds 10GB more to your free bandwidth. Payment options include credit cards, PayPal, gift cards, cryptocurrencies, and more.

If any problems arise with the service, you’ll only have three business days to ask for a refund and only if you haven’t exceeded the 10GB traffic limit.

Windscribe has servers in 110 cities across 60+ countries, but only 10 of these locations are available with the free plan.

The provider’s Windows and Mac apps have a firewall, which blocks all connectivity outside of the VPN tunnel to protect you from any possible leaks. Moreover, Windscribe deems its firewall superior to a regular kill switch, which it calls a 'reactive measure' that still entails a risk of packets leaving your computer over the default gateway (your ISP).

The browser extensions have a few perks of their own, such as spoofing your computer’s timezone to match the location you’re connected to via VPN. This prevents websites from finding out you’re using a VPN when they check the timezone of your computer.

The extensions also feature the Split Personality option, which prevents browser fingerprinting by rotating your browser’s user agent each time you open it.

The Anti-Social feature blocks all social media trackers on the websites you visit, while the Ad Blocker defeats all those pesky ads.

Windscribe’s desktop clients have the unique capability to import custom OpenVPN configuration files from other providers, listing those servers next to its own.

If you choose one of the paid plans, you will be able to secure up to five devices at the same time (the free plan allows only one). This number can be further increased if you enable the service on one of the routers that support it.

The impenetrable encryption is ensured by the use of the 256-AES algorithm, accompanied by the SHA-512 authentication.

To protect your privacy, Windscribe also relies on the usual transfer protocols: IKEv2 and OpenVPN. IKEv2 is used as a default and recommended by the provider itself, ensuring the best possible performance.

Windscribe has its own proprietary, fully customizable DNS-based blocker option called ROBERT, which blocks the content you choose to block, such as malware, phishing, botnets, ads, tracking domains at the DNS level and more.

The no-logs policy lists the usual guarantees: not to store connection or session logs, your online activities or IP timestamps. The only information collected is for the purpose of enforcing the free plan and prevent abuses, and it includes the amount of data transferred on a monthly basis as well as when you last used the service.

Although these claims aren’t easy to substantiate without an outsider audit, the company still makes an effort to prove its dedication to your privacy. Namely, every year it publishes a Transparency Report where it lists all the data requests received from the DMCA and other organization with which it could not comply because there is no data to share.

That said, keep in mind that Canada, where this provider is based, is one of the Five Eyes countries (along with US, UK, Australia, and New Zealand), which share intelligence data among each other and aren’t exactly the poster children of privacy protection.

Windscribe provides excellent performance in terms of download speed, connection times, and stability, provided you use the default IKEv2 protocol. The results are slightly poorer with OpenVPN although not terribly inferior to IKEv2.

One of the most sought-after features in the VPN industry is access to popular streaming services that limit their usage in certain regions due to company policies or other reasons. These include the ever-popular Netflix, whose US, UK, Japanese, and Canadian libraries can be accessed via special servers cleverly named Windflix. Unfortunately, the provider currently lacks support for unblocking BBC iPlayer, Amazon Prime, and some other streaming services.

Most of the provider’s servers are P2P-optimized, which means that unlimited torrenting is supported. The servers that don’t support torrenting are indicated in the clients.

Windscribe can be installed on Windows, Mac, Android, iPhone, Linux, Amazon Fire, Windows Phone and many, many more, with clients available for the major platforms and manual installation guides for all the supported platforms.

If the website’s large library isn’t enough to address all your concerns, then the friendly customer service agents are there for you. You can reach them through chat, email and even Reddit, although the company doesn’t have many agents at its immediate disposal so you might need to wait for a while to get a response.

Windscribe is a superb VPN service that offers plenty of usual and unusual features, such as customizable pricing plans, various blocker options, importing of custom OpenVPN configuration, and browser-only options for an extra level of privacy.