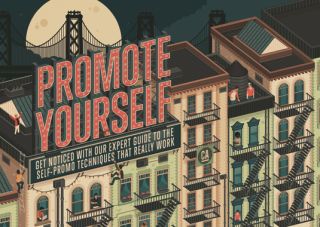 Rory Hamilton can laugh about the Ass in a Box now, but he visibly cringes a little too. Fifteen years ago when he was trying to break into the advertising agency he came up with the idea of sending a bum in a box to a few creative directors he admired. Emblazoned on the gift were the words 'Whose (sic) ass do I have to kiss to get a job around here?'

"I thought that by using more creative means I would stand out, that I'd be the guy that they gave an internship to," says Hamilton. "I was ready for them to say yes or no, but it turns out that the worst response was for them to say nothing at all."

Now Hamilton runs the award-winning Boys and Girls agency in Dublin, creating campaigns for brands like mobile phone network Three, Nissan and Kopparberg cider. Its standfirst promises 'daringly simple ideas' and it's tempting to draw a line between its founder's first foray into his own self-promotion and the ideals that continue to inspire the agency.

Build your own brand

"I never thought about it that way, but Boys and Girls has taken the spirit of the 'ass in the box' stunt and brought it on," he admits. "Self promotion is massively important as an agency; arguably the most important brand that you ever work on is your own."

When Hamilton and his partners set up Boys and Girls in 2009, they didn't have a single client, but this forced the founders into thinking creatively about how they were going to get the new brand out there. The answer came in 22,742 pieces, which was the amount of LEGO bricks it took to build the agency's new boardroom table.

Photos of it quickly went viral as it was picked up by a host of design and inspiration blogs, and it still crops up regularly on Pinterest and Tumblr. A stop-motion video of the table being assembled has had more than 112,000 views on YouTube.

"It worked to get us noticed by the international creative community and provided a home-court advantage whenever any clients came in to see our work," Hamilton says.

"That success led to us making a reception desk held up by balloons and a ceiling made of table-tennis balls. Once you start looking at your office as a series of opportunities to be creative, it escalates quickly."

For young creatives just about to leave university, or those still trying to break into the creative industries, the pressure is on to find the right way to speak to the right people.

A recent study found there were 49,920 students on creative arts and design courses in the UK; add to this all those who study something else before eyeing up a position in an advertising or design agency. In short, competition is fierce.

A while back, designer George McCallum turned up at six London agencies with a two-metre long wooden trainer, introduced himself and handed over his CV. The University of West of England graduate felt that he had to do something different, to avoid becoming "another CV clogging up an overflowing in-box."

He visited the likes of KK Outlet, Mother London, Wieden+Kennedy and YCN, and made videos capturing the reactions he encountered, which were fairly mixed.

"They ranged from utter indifference and bemusement, to being invited in for beers and a tour of the office. I hoped to demonstrate a willingness to put my neck on the line, dedication, organisational skills and an ability to see an idea through to the bitter end."

And particularly once the videos started to get picked up by the design press, McCallum's endeavours started to pay dividends.

"I got some good meetings and the chance to show my portfolio to some really exciting people. The exposure raised my profile and got me various freelance projects for clients like TED and The National Portrait Gallery."

Inspired by his experiences, McCallum has continued to experiment with speculative applications that go beyond the finely crafted cover letter.

He visited the Don't Panic studio and – dressed in a tuxedo – handed over a specially made Poor Man's Oscar statuette (alongside his CV in a golden awards-ceremony-style envelope). The accompanying video may be pretty awkward, but it worked out – shortly afterwards Don't Panic offered him a job.

"I wouldn't say we gave George a job because of his stunt, but it certainly persuaded us to give him the opportunity to persuade us," explains Don't Panic's Richard Beer.

"It showed us that he had a pretty subversive sense of humour, a creative mind and the courage to put his dignity in harm's way, all of which are core qualities for a lot of what we do."

In an industry based on personal relationships, finding ways to weasel your way into agencies and studios to get face-to-face with the key people has proved a popular self-promotional challenge.

There is a fine line between a smart, memorable and effective self-promo project and an irritating gimmick. Often the latter are those stunts that feel totally divorced from the skills the creator is trying to demonstrate.

This was a trap Robby Leonardi was determined to avoid. The New York-based designer who works across illustration, graphic design, animation, and front-end development noticed a trend in his industry for interactive CVs and so decided to create his own.

Visitors to Leonardi's website are able to select either his design portfolio or his interactive resume – the first is a fairly traditional presentation of his work but the second is a tremendous platform game where users navigate a bespectacled superhero through snarling skyscrapers, an undersea kingdom and a hot air balloon ride.

It's a giddy experience, but crucially form and content are completely aligned; we learn about what a good designer Leonardi is through some really engaging design work. "The impact was huge, it's been viewed nearly three million times,"

Leonardi says. "Many people contacted me and many companies also offered me jobs. The media attention helped a lot and social media also played a big role. Being fun and different really pays off."

Strikingly, Leonardi's interactive resume ends on a contact page, reminding us that it's fun but it exists to try and drum up new business.

New York-based agency Dark Igloo have played around with their contact page too, turning it into an 80s-style racing game. More recently the studio produced Bored Game, a deliciously weird parody of 80s toy commercials featuring a super-creepy wizard.

"The spirit and tone of Bored Game has been referenced by clients as something that they're looking for, even if it's not a video project," Dark Igloo's Dave Frances explains. "These days, the line between professional and personal work has blurred, and that's a very satisfying feeling."

He is keen to see this kind of work in the applicants' portfolios too. "They demonstrate a creative drive from people who are in better touch with their own voice and passions."

Karin Langeveld of Dutch design studio Trapped in Suburbia agrees. Although it's a small agency, Langeveld admits that when they are hiring, clever self-promotional work is a real asset.

"These projects definitely get you on top of the pile, but it has to be original and represent who you are as a designer. We believe that involving people in designs will have a bigger impact but only when it's done correctly. When your design becomes an experience, then the magic happens."

This is something that Langeveld and her colleagues practice as well as preach. Most recently the studio created Aim For The Day, a customised dartboard which challenges the thrower to move out of their creative comfort zone (the board includes sectors saying 'Do something scary' or 'Take a new route to work.')

"We hope in the future, these fun free creative projects will trigger our dream client to give us a call and say, 'I like what you guys are doing, here is some money. Now go and make something that you have always wanted to make.'"

Strike while the iron's hot

For all the clever creative thinking that goes into self-promotional work though, sometimes it's about seeing and seizing an opportunity, and that brings us back to Rory Hamilton.

He gave a talk at the Dublin Institute of Technology, during which he mentioned that the agency enjoyed competitive games of FIFA 2015.

After the lecture, one of the students, James Groarke, took to Twitter to challenge him to a game. The deal was that if Groarke could beat Hamilton, he'd be offered an internship, and he even produced a video calling Hamilton out.

"It was a clever idea, really well executed," Hamilton says. "When he arrived he'd been practising and inspired by going a goal down, he came back to win 2–1 in extra time. The win earned him the internship, but I have to admit that the idea earned him the opportunity, not the match."

The full version of this feature first appeared in Computer Arts issue 240.