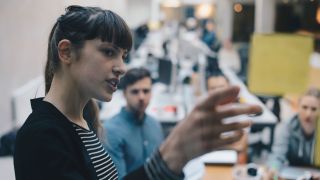 When was the last time you asked a plumber to re-fit an entire bathroom for free, just to prove they could do it, and so they might get to do the kitchen – despite having clearly run a successful business for years, and having been recommended by several happy customers? Never?

Would you expect a restauranteur to give all their customers their first three-course meal and drinks free of charge, to show their team of chefs and waiting staff are worthy of future custom? No?

People in these professions don’t have the time or inclination to do things for free, because their worth – their insight and expertise – is proven, or at the very least, implicit. People come to them with a degree of expectation, but they also expect to pay, unless there's a flood or food poisoning incident, or they completely ignore what they asked for and provide something wholly inappropriate.

So why would any self-respecting creative business jump through hoops for nothing? People do it because it’s 'normal', or because its part of the 'pro bono pitch process'. They say it's all about 'great opportunities' or 'exposure'. Well, you know what? Screw that. Screw being screwed out of your great ideas, and not receiving a penny for their value, or the time, talent and resources that went into them.

Why free pitching is still accepted

It's easier said than done, though. Infuriatingly, free pitching seems to still be accepted practice. And for some reason it seems more prevalent among larger clients who have plenty of budget to invest in creative talent to further their cause. So many of these clients assume creatives will jump at the ‘opportunity’ and really want to work with them, they might even expect designers to feel privileged that they've even been asked. All of this would be more palatable if the carrot-danglers would just pay a fair price for the time and resources that go into a pitch. But they won’t, unless the design community takes a united stand.

It also begs the question of whether playing creative agencies against each other is a good thing in the first place – especially to such lengths without selection. Competition is healthy, but going to such lengths without fair recompense is just wrong. And surely a brand owner’s selection criteria – in a day and age where we can share profiles, experience, portfolios and case studies online, thrash out briefs and ideas face-to-face via Zoom and its equivalents, and collaborate virtually – should consist of ticking just two boxes:

That’s about it. Beyond an adult conversation and perhaps a spot of background research, asking for anything more without paying for it is, at best, disrespectful of people’s time, talent and resources. At worst, it’s a cynical harvesting of other people’s ideas with no regard for their worth, whether it’s ‘right for the project’ or not. And – let’s be brutally honest – it can often amount to a thinly veiled theft of intellectual property.

This problem is nothing new. It’s a known issue, and a conversation most of us have had many times. So, what are we going to do about it?

What can we do about free pitching?

In cases where competitive pitching is still the preferred approach, at Brown&co, we think it’s time for a universal set of simple agency standards regarding payment for speculative work, complete with an industry-recognised qualifying symbol, which clients opt into by default. We also think it’s only fair that anyone opting out and persisting with the pro bono approach should have to make their decision clear and up-front. Let’s shame all those that perpetuate the piss-take!

Brown&co has recently pulled out of two creative pitches because we simply weren’t being offered fair value for our creative expertise and intellectual property – and to be honest, even if we’d won the pitch, it would barely have been a financially viable project, taking into account the time and resources we’d already thrown at it. We think it’s time to take a collective stand against this absurd approach to business. If nothing more, it’ll soon tell us which clients really understand the value of what they’re investing in.

We’ve been talking at some length with the DBA, and its in full agreement that something’s got to give. It's even asked us to support them in pioneering this much-needed change.