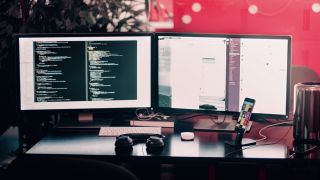 There are many different PCs available, all at different price points, in a variety of shapes and sizes, and with a bewildering range of specifications. And while you shouldn't overspend, it may not be wise to head too far downmarket either. With the continual improvement in computer components and technologies, the line between what constitutes a consumer PC and a workstation is somewhat blurred, but for our purposes we’ll delineate the two as follows…

A consumer PC is one that’s designed for general use: email, web surfing, some Microsoft Office perhaps, storing and editing of photos, playback of music and movies, casual gaming – that sort of thing. None of these are particularly demanding tasks, and even a relatively cheap laptop should be able to handle most of them.

With a workstation, we’re generally talking about a desktop machine that’s intended for daily use (see our round up of the best computers for graphic design for some excellent examples). It needs to do a lot of heavy lifting – image manipulation, video editing, motion graphics, 3D visualisation, programming, game development, CAD and so on – and needs to be powerful, stable, durable and reliable. Whether it’s in an office or at home, you probably rely on it for your livelihood, and so things like slow-down, endless progress bars, and insufficient RAM and hard drive space need to be avoided.

There’s also the issue of budget: you may not want to spend a lot of money on a PC that’s going to be used by the whole family, with the threat of chocolatey fingers and fizzy-drink spillage; but a workstation should be properly specced with the best components you can afford – if you work for yourself it’s a tax-deducible expense anyway.

Consumer-level PCs start cheap – very cheap in fact. For around £200 you can pick up a system that will do most of the tasks we described, but will be limited in terms of CPU power, amount of RAM and HD space, and will probably feature an integrated GPU – one that’s built into the CPU chip – and which might prove to be a bottleneck when it comes to anything graphics related, be it games or content creation.

However you only need to jump up to the £500 mark to find systems with quad-core processors, a terabyte of storage and a more powerful (though still integrated) GPU. It may only come with 8GB of RAM or so, but this is easily expandable and RAM is cheap these days – you can add an additional 16GB for just over £100.

Clearly this isn't a workstation, although you can certainly do work on it. A PC of this standard will handle apps like Photoshop and Illustrator, maybe even Premiere Pro, but you may find that it struggles with big files and grinds to a halt with complex, multi-layered projects. This is where a proper workstation comes into its own – albeit at a higher price.

The benefit of having a bigger budget is that you can configure your PC exactly how you want it. Cheaper machines tend be pre-configured with stock components, but with workstations you can specify them to suit your needs. For example, you could shift some budget to a better GPU, knowing you can upgrade the RAM further down the line; or opt for a more powerful processor while sacrificing storage. Workstations also tend to come in a ‘tower’ form factor, which gives you room to expand; the motherboard will be capable of supporting multiple hard drives and lots of RAM, should your work require it.

Entry-level workstation-class PCs tend to start around the £900-£1,000 mark, and with these you’ll see a marked difference in components: CPUs are 6- or 8-core, with higher clock speeds; you get more, higher-rated RAM, larger SSD drives and better I/O options. However you could still be limited to an integrated graphics processor, and so it might worth paying extra to have a machine with a dedicated GPU, especially if you’re doing lots of graphics-intensive work, or your apps can benefit from GPU acceleration.

Things start to get interesting around the £1,800-£2,500 mark, with machines that posses real grunt. As well as having a wider choice of multi-core processors, you might also be able to specify a second CPU for extreme workloads. Mid-level workstations will happily support up to 256GB of error correction code (EEC) RAM and lots of internal storage, including NVMe (non-volatile memory express) drives.

ECC RAM isn't essential – its rare that the memory errors cause major issues – but if the work you do requires accuracy or long computation times, then its something worth thinking about. Just bear in mind that motherboards on lower-spec machines won't necessarily support it, so check beforehand.

Another advantage of workstation-class PCs is that you will get a better warranty, which is normally included in the price (with consumer PCs you may have to pay for it separately). This can include five instead of three years coverage, plus things like free technical support, data recovery and collection for back-to-base repairs. Again, if PC downtime equals lost earnings, this can prove very useful.

If you can afford it, a high-end workstation will provide the most flexibility and expandability, with support for the fastest, most powerful components; huge amounts of RAM and storage; plus multiple GPUs which can be important for things like 3D rendering, video editing, visual effects, complex simulations, machine learning and so on. The base machine will be expensive, but you can spread the cost of expansion over the coming months and years.

Workstation vs consumer PC: which should you buy?

Choosing between a consumer and workstation PC can be tricky, especially in the mid-range, where the distinction isn’t so clear-cut. But the main things to consider are power and reliability: do you require a powerful computer that’s working all day, every day, or do you really just need something to run Microsoft Office with occasional forays into a few creative apps?

Either way you should always choose the most affordable computer that fulfils your needs – there’s little point in spending more on multi-core processors that will be running single-threaded tasks, or buying an expensive GPU that sits there twiddling its digits all day long. Conversely, you should always think ahead and make sure you get a machine that can expand and grow with you, your family or your business, over time.