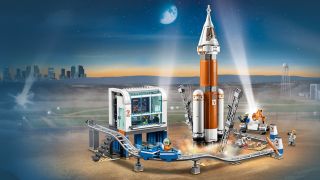 Lego City sets offer you the joy of constructing your own civilisation from scratch, and in theory we'd love to buy every single one of them. But in practice, they don't come cheap, and you'd have to spent an awful lot of money to do so. So here, we bring together the best Lego sets for building an urban environment: everything from public amenities to local businesses, plus some epic additions to the range such as the Deep Space Rocket Launcher.

One is its complexity. This is not just a single building but essentially three integrated ones: a jail section, a headquarters building and a garage. In fact, the designers have squeezed in more besides that, in the form of a lookout tower on top of the garage, and a helipad above the main headquarters. Best of all, everything is nicely connected together through a series of catwalks, stairs and doors, allowing plenty of variety in where you place your minifigures and accessories.

Also, of all the Lego City sets, this boasts the best attention to detail, making this a particularly believable world. For instance, we love that there’s a place for taking criminals' mugshots, complete with a height chart. We also appreciated the inclusion of both a water cooler and a coffee maker: if there’s one thing we know from cop dramas, they like their drinks. Additionally, there are some super-fun action features here, including the launcher arm on the garage, which causes the car to come rushing out, and a mechanism that allows you to blow the side of the jail clean off after placing dynamite in the climate control unit on the side. In conclusion, this set isn’t cheap, but it does offer excellent value.

Along with a cop shop, every city needs a fire station. And Lego’s done a very good job with its Fire Station, which has a very realistic look and features some beautiful design touches. We particularly love the fire fighting water scooter, with rotatable water gun (we're not sure how many of these there are in real life, but who really cares?). Plus the inclusion of a drone, with spinning rotors and its own landing pad, brings things nicely up to date for 2020.

It's not the biggest of Lego City sets: the building as a whole is best described as compact, and it’s a shame there’s no fire pole, or even stairs to connect the rooms. Note also that the garage is only just big enough to house the truck. But this does keep the cost of the set down, and overall, this is a very well designed set that brings back the feel of classic Lego in its stylish simplicity.

We mentioned earlier that Lego City seems riddled with crime, and here’s an offbeat example. This Donut Store may be dominated by a giant pink donut sign, along with a cool crane for lifting on and off. But what you may not notice is the ATM on the side, which is waiting to be broken into by a crook called Duke DeTain, one of 10 minifigures in this set. You can then use a trigger to release the giant donut that then rolls off the roof and crushes him, which is either authoritarian overreach or brilliantly funny, depending on how developed your social conscience is.

By itself the Donut Shop might look a little forlorn, so Lego has also supplied a neighbouring toy store. This is a little plain and unexciting, to be honest, but it’s more than made up for by the impressive crane, which comes with lifting and extending features that add a lot of fun to this set. We also love the coffee cargo bike; because hipsters are people too, even in Lego City.

Okay, let’s get this out of the way first: this is not actually a service station, it’s what Americans would call a gas station and Brits would call a petrol station. As Lego is a Dutch brand, maybe something got lost in translation. With all that said, though, we love this Lego City service station set. It comes with a great range of very well-designed vehicles, and there are some lovely, up-to-date touches, including a modern style pump with credit card machine and an electric car charging station for the red car.

Our only criticisms are that the tiny branch of City Pizza inside the station is a bit basic, and the back of the sign looks kind of unfinished. But other than that, this is a solid Lego City set that ticks all the boxes and offers very good value.

As you’ll see from the picture above, the Lego City Tuning Workshop set is more about vehicles than buildings, but to be fair, they are some pretty great vehicles here. The breakdown truck with working boom, the classy hot-rod and the rocket-powered motorbike, in particular, masterfully tread that fine line between being very cool, without being over-the-top and silly. The camping trailer is very good too, and while you won’t necessarily expect it to be there, the doghouse (complete with dog, of course) is actually quite brilliant.

At the centre of the set lies one large building with large sliding door at the front. Inside, everything works together very cleverly, from the gantry crane which slides up and down, forward and back, along the ceiling, to the (removable) jack stand, which allows you to lift any vehicle in the set. Above all, though, Lego has really got the rock'n'roll look and feel of this place nailed, and an environment that could easily have missed the mark has turned out a triumph.

Simple fun for the very young.

While the Tuning Workshop (above) has a gritty, grown-up feel to it, the Garage Centre in comparison has a much more colourful and simple look. It comes with three fairly simple but nicely designed buildings: a drive-through car wash with hose and bucket, a toy garage with car lift, and a petrol station pump with flexible hose. There are also three attractive vehicles, in the form of a sports car, a tow truck and a fuel tanker with flexible hose.

To be honest, there’s nothing hugely exciting about this Lego City set, but then again, there’s very little to criticise either. All in all, this is a solid, dependable product with no obvious flaws, that feels particularly suitable for younger children (indeed, Lego's given it the lowest age rating on this list, at just 4+).

Snow joke, this place is dangerous.

£60
View at Amazon
£64.99
View at IWOOT
£64.99
View at The Hut UK
See all prices (5 found)
The sweet half-pipe
So many minifigures
Light on resort facilities
What’s up with that TV?

If many parts of Lego City are riddled with crime, it seems that the Ski Resort is riddled with injuries. Lots of injuries. Because this set seems very heavily weighted towards dealing with ski-related calamities. The main building is a two-level rescue base, and the vehicles (snowmobile with trailer, helicopter with opening cockpit and rescue truck) seem mainly designed for getting people out of trouble too.

If your vision of a ski resort is all about fun in the snow and apres-ski, then, this set might not be perfect for you; most notably, it doesn’t actually include a ski lodge. But if you’re more interested in action on the slopes, along with a healthy slice of drama and disaster, then you'll love it. This nicely designed set also features a beautifully realised half-pipe, with stair access and a separate grind rail; a booth for cocoa and cakes; a ski shop with (bizarrely) a huge TV on its roof, and a ton of accessories and minifigures to keep you entertained.

This set is centred around a very cool control tower, with lots of interested elements packed into quite a tight space, along with some fun vehicles, accessories and minifigures. We particularly love the Buzz Lightyear-style jet pack, which you can easily attach to your characters. There's also a jail attached to the tower, because it seems that in Lego City, criminals really are everywhere.

The least successful part of this set is the parachute. It's actually nicely constructed, but like all toy parachutes, if dropped from a normal height (ie a few feet) in calm weather, it just drops to the floor with a thump, rather than the floating descent pictured in the image above.

Despite that issue though, this is a lovely set that's full of fun and imaginative possibility. Some older children and adults might find it a little unsophisticated, but it's certainly well geared to younger children.

Bring the space race to your City.

Who in their right mind wouldn't want a rocket launch pad in their city? And luckily this Lego City Deep Space Rocket set is very nicely designed indeed. The highlight is the rocket itself, with different parts that are all detachable, representing the different stages of ascent. There’s even a space telescope inside, ready to be launched into orbit with its own solar wings.

The launchpad also works beautifully, with the refuelling towers on the sides retracting automatically on lift-off. And the main launch control building, with its huge windows, is suitably epic.

The only slight bum note comes from the track and car mechanism to transport the minifigures between the two, which works fine but seems a little pointless. On the whole, though, this is an original and brilliantly designed Lego City environment that any space junkie will love.