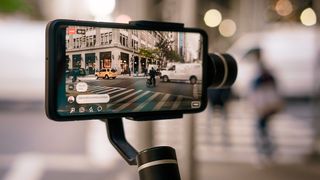 You're here because you want to know what the best smartphone tripods of 2020 are so far, and that's exactly what you'll find right here. Smartphones have made massive inroads into camera tech, and a quality smartphone tripod can really help produce professional-looking images and video.

While many of the best camera phones come with optical image stabilisation and help smooth out unwanted camera shake, there will always be times when more stable support is needed. Whether you want to shoot a piece to camera without the arm-outstretched vlogging look, or capture a long exposure photo in low light, it’s a good idea to attach your phone to a tripod.

But don't worry, this doesn't mean lugging a tripod the size of the Eiffel tower around (although if that is what you're after, browse our best tripods article). There are plenty of ultra-compact tripods on the market designed specifically for phones. And the best ones are so compact, they can sit on a table top, each tripod leg being around 20cm long, folding down to the size of a 500ml water bottle.

A simple but well made phone tripod that nails the basics

Our pick of the best smartphone tripods right now is the Manfrotto PIXI Mini Tripod Kit with universal smartphone clamp. Manfrotto’s PIXI mini tripods have been around for several years and have established a reputation for good quality at a reasonable price. The particular version is a two-part kit comprised of a PIXI Mini tripod and Manfrotto’s Universal Smartphone Clamp.

This simple, spring-loaded clamp can accommodate a phone up to 84mm wide – more than enough for even a phablet-sized device like a Galaxy Note 10. The clamp’s grippy jaws hold your phone securely, and the clamp itself attaches to a small ball head atop the PIXI tripod, making it easy to tilt your phone up or down for high or low-angle shots, though only with the phone mounted horizontally.

You can also detach the clamp and mount a lightweight interchangeable lens camera to the ball head instead, increasing the tripod’s versatility. And when it’s time to get on the move, fold the tripod’s legs together and they form an ergonomic handle that makes handheld vlogging much more stable and comfortable.

This smartphone tripod can hold much more than just your phone

Joby’s GorillaPod Mobile Rig looks more like a stick figure than a typical tripod, thanks to its arm-like supports on either side of the phone holder. These can be used to mount compact LED lights or a separate microphone, helping you boost the quality of your footage. The GorillaPod’s extra-flexible legs allow you to instantly bend them to any angle for effortless set-up, and you can even wrap the legs around objects like railings for extra variety in shot compositions and framing.

Your phone is held securely in Joby’s GripTight PRO Phone mount. This uses a single locking knob to simultaneously secure your phone and to switch between horizontal and vertical positioning – an option lacking in many clamps - though the do-it-all knob means it’s possible to accidentally release your phone when you only want to rotate it. The clamp is mounted on a tilt hinge for extra framing flexibility, and above the holder is a cold-shoe-type mount ideal for attaching a compact shotgun mic.

The love child of a mini tripod and a selfie stick

Next in our roundup of the best smartphone tripods is the Joby GripTight PRO TelePod. The trouble with most mini tripods is that they have to be perched on a table if you need extra height, but that’s not always an option. The TelePod can stand tall thanks to its nifty telescoping centre column, which extends up to 79cm. It’s a clever trick, though the three tripod legs are still as short as those on a typical tabletop tripod, meaning it’s not the most stable phone support when your phone is balancing high up.

Alternatively, you can take hold of your phone and use the TelePod as a monopod support to keep your phone level when recording panning shots. Not only that, but the tripod legs can fold together to form a handle, then, with the centre column outstretched, you’ve got a good quality selfie stick. Joby even includes a Bluetooth remote so you can control your iPhone or Android phone’s camera not just when it’s on the end of the selfie stick, but from up to 90 feet away. The supplied phone holder is Joby’s feature-packed GripTight PRO Phone mount that compliments the TelePod well, with its extensive adjustment and quality build.

Small yet great build and value for money

The smaller sibling of the Joby GripTight PRO TelePod, the Joby GorillaPod Mobile Mini is still a great option for a lot of smartphone camera enthusiasts. First of all, weighing at 32 grams, this is not going to slow you down, and with its diminutive size, it take up a lot of room either. It's the cheapest tripod that Joby currently make, but it includes the companies trademark flexible legs, made with several moveable joints.

Because of this, you can stand the Joby GorillaPod Mobile Mini up exactly like a mini table-top tripod, or attach it to something with its wrap-around legs. For less than $20/£20, it will come with a phone mount too, so you're good to go from the off. If you're looking for an extremely portable, convenient (yet small) tripod, this is a fantastic option.

If you like the sound of the Joby TelePod’s tripod and selfie stick versatility, but are less keen on its hefty price tag, Benro may have the answer with its BK10. It performs the same tripod-to-selfie stick transformation for a fraction of the cost, yet it’s still made by a well-respected tripod brand and feels much better made than the bargain price would suggest. With the telescopic centre column outstretched, your phone can rise up to 91cm off the deck, though as you’d imagine, balancing your phone this high when the tripod’s legs are so short is a bit precarious.

You can’t have everything at this price, and Benro’s phone clamp is very basic. It does hold reasonably securely though, and while it won’t rotate between horizontal and vertical orientation, the tripod’s compact ball head will let you do this. Somehow Benro has also managed to throw in a Bluetooth trigger for remote camera control, and its 30-metre range is easily enough for most shooting scenarios.

A full-sized tripod for your phone

The last, but not least, to feature on our best smartphone tripods 2020 list, is kind of a big deal! Most phone tripods are so small they end up compromised in terms of support, especially when you use a phone tripod for regular shoots. Manfrotto's Compact Light Smart smartphone tripod has no such drawbacks, as it combines a smartphone clamp holder with a full-size travel tripod, just as you’d use for an interchangeable lens camera. This enables a genuinely usable 131cm max shooting height, as each leg of the tripod has four sections so they spread far wider than the single-section legs on a standard tabletop tripod, significantly boosting stability.

Naturally this does mean that at 39cm long when packed, this isn’t the most compact phone support out there, but it is very small for a ‘proper’ tripod, and at only 840g, it’s also extremely light for its size. The included phone holder isn’t as fancy as the clamp you get with a Joby GorillaPod Mobile Rig, but it does the job, and the same can be said of the basic ball head, which also allows your phone to rotate through 90-degrees to shoot in portrait mode. Factor the price, which is less than some tricked-up tabletop tripods, and this Manfrotto support certainly gives you a lot for the money.

How to choose the best smartphone tripod

A phone tripod is only as good as the mechanism it uses to hold your phone. Whereas a traditional camera will have a dedicated tripod mounting point, nowadays you’re lucky if there's a headphone jack on your phone. This means a smartphone tripod will usually be bundled with a mounting clamp that grips your phone, similar to a phone holder for your car. All the tripods on this list come bundled with a phone holder, so they’re ready to use.

What’s more, phone tripod manufacturers also recognise that today’s phones are much wider than those from a few years ago, so you should be able to mount even the widest XL/+/Max-sized devices with ease.