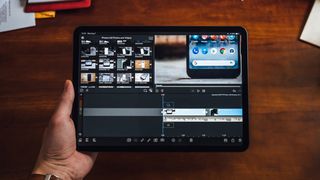 The best video editing apps are surprisingly powerful these days. Whether you're using a smartphone or tablet, iOS or Android, you can find some great tools that will give you professional looking results. In fact, depending on the task, they can even sometimes be preferable to full-blown desktop software.

Why? Because video editing apps are designed for smaller screens, the interfaces are often clearer, better thought-through, and more user friendly than their Windows and Mac OS equivalents, which makes them a particularly good choice for beginners. They're often also a lot cheaper, too.

But among all the many video editing apps out there, which one should you choose? To help you decide, we've brought together the best on the market today, both paid-for and free, and for both iOS and Android. While they vary enormously in terms of features and complexity, they all benefit from intuitive interfaces and reliable functionality, making them perfect for enthusiasts and professionals alike.

However, if you feel these video editing apps won't be powerful enough for your needs, then instead check out our roundup of video editing software, as well as the best laptops for video editing.

On first encounter, Adobe’s professional video editing apps, such as Premiere Pro, After Effects and Audition, can be a little intimidating. However powerful these tools are, there’s definitely a considerable learning curve, and newbies wanting to knock out a quick video for YouTube, Snapchat or Instagram Stories will often be looking for something easier to pick up and play with. So last October, Adobe launched Premiere Rush, which is designed specifically for anyone wanting to process video clips quickly and upload them to a social network.

Available for free on iOS, Android and desktop, the app is designed to be easy to use. That’s obvious the moment you open it up, and see a simplified interface featuring large icons and panels, making it especially great for touchscreen use. And when you come to start using it, typical tasks like adding videos to the timeline through drag-and-drop, or mixing in background music, are intuitive and fuss-free, involving the minimum number of clicks.

The app offers four video and three audio tracks for editing. As you’d expect, its export options are optimised for every social media platform you’ve heard of, including Snapchat, Instagram, Facebook, Twitter, and Vimeo. Alternatively, you can just export the video to your local machine, or save it to the cloud so you can access it on all your devices.

Overall, this tool is by no means as powerful as Premiere Pro, and you wouldn’t want to make a feature film with it. But if you’re just putting together relatively short and straightforward online videos, it’s going to have everything you need. (And if it doesn’t, its Creative Cloud integration means you can always open your saved Rush project in Premiere Pro and tweak it there instead.)

Edit and enjoy your GoPro photos and videos.

If you have a GoPro then the GoPro app is for you. This most intuitive of video editing apps makes it easy to automatically import your footage and create videos synced to music in just a few clicks. You can add photos and time lapse sequences to your videos and impress your friends with gauges and graphs to show how high and how fast you went.

Create video clips to share on YouTube and Facebook and go through frame-by-frame to find the ideal high-quality still that will want to make viewers take a look at your clip. If you subscribe to GoPro Plus you get access to a huge variety of extra soundtracks and you can auto upload photos and videos to the cloud for editing anywhere.

The most professional video editing app for iOS.

If you’re looking for professional-level editing on your iPhone or iPad, then out of all the video editing apps on this list LumaFusion is the one to go for.

Aimed at mobile journalists, filmmakers, and video producers wanting to capture footage while on the move, it offers six video/audio tracks for photos, videos, titles and graphics, plus an extra six audio tracks for narration, music and sound effects, in an interface that will be familiar to Final Cut Pro users.

Note though, that’s there’s no syncing between devices as yet, so you can’t start editing on your iPhone and then continue on your iPad, for example.

The most professional video editing app for Android.

KineMaster is a top-notch, pro-level video editing app for Android. Supporting multiple layers of video (on supported Android devices), images and text, as well as multi-track audio, it enables you to trim video clips and layers precisely at frame-by-frame granularity, while audio clip timing can be adjusted with sub-frame accuracy.

KineMaster also offers instant edit previews, precise volume envelope control, colour LUT filters, speed controls, chroma key compositing and 3D transitions. It’s free to download, but note that with it adds watermarks to videos, which you have to take out a subscription to remove.

iMovie is the most powerful of Apple’s own video editing apps, and it’s been shipping free with new Apple devices for a while now. It’s not as powerful as Luma Fusion, but on the plus side that means it offers a clean, intuitive interface that makes it easy to edit footage and add titles, music, voiceovers and photos.

First launched in 2010, the latest version of app supports 4K on iPhone 6s, iPhone 6s Plus, iPad Air 2, iPad Pro, and later devices. You can save videos to the iCloud drive, stream them to an Apple TV via AirPlay, and everything integrates beautifully with Apple Photos, Mail and Messages.

While we wouldn’t necessarily recommend iMovie for professional video editing, the friendly and straightforward interface provides everything you need to knock out a short, good looking video. And as the app comes free with your iPhone anyway, there’s absolutely no reason not to give it a go.

If you’re an Android user looking for a simple and practical way to edit online videos that doesn’t involve a steep learning curve, Filmarago is worth a look. It’s very easy to use, and can help make your videos look impressively professional thanks to a range of themed filters and effects,

Unlike its desktop sibling, it’s also free to download, and won't stamp a watermark or place a time limit on your clip either, so it’s well worth giving a try. Admittedly, some in-app purchases are available, such as songs and effects, but your videos can work perfectly well without them, and the internal ads aren’t especially intrusive either.

The best video editing app for kids and families.

Visit Site
Free
Fun for families
Not a “serious” app

One of the more lightweight and fun video editing apps on this list, Apple Clips allows you to create and send video message or tell video stories with filters, animated text, music, emoji, and stickers.

Primarily aimed at children and families, it’s lightweight stuff, and we wouldn’t previously have even included it on this list. However, successive updates continue to nudge it a little closer to being a serious video editing app.

Features released about a year ago include more diverse sharing options (share videos via AirDrop or email, save them to Files, or upload them to cloud storage services); the ability to create songs in GarageBand and add them directly to new or existing videos; and a new camcorder filter. And with the latest update this April, there's a new Duplicate button to make copies of your clips, a Split button to divide your clip into two sections, and improvements to overall performance and stability

Filmmaker Pro is another good choice for pro-level video editing on your iPhone. This most advanced of video editing apps comes with 30 excellent filters, for example, not to mention 17 transitions and Audiometer assisted voiceovers. It offers video grading, a superb green screen support, nearly 200 different fonts for your text overlays and advanced tools such as chroma keying,

Note though that, like many tools on this list, the app is free to download, but doesn’t provide you with the full feature set; for that you’re directed to in-app purchases. It also watermarks your videos, and if you want to remove them then you’ll need a monthly or annual subscription.

In other words, consider this to be a paid-for, subscription-based app, and treat the free download as basically a free trial version.

Solid, mid-level video editing app for both Android and iOS.

Cyberlink’s PowerDirector is kind of an Android equivalent of iMovie (above) – though it's also available for iOS. The app’s easy-to-use interface lets you arrange and edit your scenes on a timeline, as well as add titles and transitions. There’s also a good selection of effects, the ability to add background music and voiceovers, a photo collage maker, and support for slow motion.

The downside of the free version is that you’ll have watermarks added to your videos, but a one-off $5 in-app purchase will remove these, as well as letting you export at 1080p rather than 720p.

Inshot is an all-in-one HD image and video editor for iOS and Android that's very much geared toward creating clips for social media. It comes, for example, with pre-built canvas sizes for everything from IGTV to TikTok.

With a clear and attractive interface, this app makes it smooth and easy to import, trim and edit your clips together, and then add filters, stickers, captions, emojis, and other fun things on top, as well as free music and sound effects to the audio. So while this isn't one of the most "professional" of  video editing apps (in that it's only really for creating social videos), what it does, it does exceptionally well and it's very intuitive.