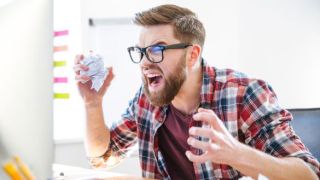 Congratulations. You've learned how to network and you've got yourself some clients. So you've got to love them, right? Except when you secretly want to strangle them.

Yes, of course, clients are the people who pay our wages, and so even when they're at their most frustrating, we do our best to keep these feelings to ourselves, smile sweetly and remain calm, polite and helpful. But there are some things guaranteed to get our blood boiling. We've rounded up the top culprits...

01. Can we have the layered files? We just want to tweak them in-house

It's an old favourite, and one that clients will try so they can get their in-house team (or more likely just someone they know) to have a play with the files. Even if they're just messing about with a font they don't like, this can potentially change the whole look and feel of the project.

Your likely response will be: "I can't give you the layered files as they are too large to transfer and in an order only I can understand. If you want to tweak the final result, we can discuss this."

But you want to say: "Why should I give you the layered file when I just know you're going to change everything and fuck it all up?"

02. Could you do something in the style of [insert name here]?

Here's how this story goes: a) Client sees something they love b) Client finds out who did it c) Client realises that designer would cost them a fortune d) Client asks you to replicate this style for a fraction of the cost.

It's incredibly frustrating when this happens. You thrive on having your own style and aesthetic; why would you want to copy someone else's? Plus, you're bound to get some stick for it in the design community.

Your likely response will be: "I respect that style and think it's great. However, have you seen this that I did for [client]? I think this style could work equally well."

Some clients just don't understand design. This is something that, unless you're very lucky, you're bound to encounter at least once in your career. It's similar to the question above – but shows an even greater misunderstanding of the design process.

Your likely response will be: "I can't send you a Word file as this was created in [insert software here]. However, I'm happy to send you a PDF file that you can open in the free Adobe Reader application for review."

But you want to say: "Word? Word? Woooooorrrrrrrrrrddddd?!!!"

One type of client who doesn't communicate well is known as 'The Columbo'. Just like the fictional detective, this client initially seems kind, but once your inbox starts erupting with dozens of update requests, you'll realise they indulge in circumstantial speech that meanders to the point, and the closest thing they know to a full stop is the phrase: "Just one more thing..."

05. This looks great – but can you add this image from Google please?

Another example of clients not understanding the design process, and IP laws in particular. Here's the scenario. You've mocked up a project using stock images (that you've bought). But the client doesn't like them – even though it's just a mockup and you've explained this several times. So, they do a bit of Googling and find the perfect image of a man in a suit at a desk. And they want THAT image. Sigh.

Your likely response will be: "We can't use that particular image as it's the property of [such and such] and has been used on another campaign. If you want an image like that I have a photographer who I collaborate with."

But you want to say: "Don't be such a fool! For one, that image is terrible. And secondly, you can't just take images from wherever you want and use them! Don't you know anything?"

06. This job will get you get loads of exposure. Can you do it for free?

It's one of the oldest tricks in the book: trying to get a designer friend to do a commercial project as if it was a personal party invite. There's no excuse for it – even if you're at the beginning of your design career. It will likely make your blood boil.

As for the exposure line – would you say to a bathroom fitter, "I can't pay you, but when everyone sees my bathroom I'll tell them you did it," or to your dentist "If you make my teeth whiter for free I'll tell my friends and they'll come and pay to have theirs whitened." No. You wouldn't.

Your likely response will be: "Sorry, I'm busy and can't take on any non-paying projects."

But you want to say: Unpublishable. But you can learn how to work through your rage by following these guidelines.

Ah, the well-meaning idiot; 'the design savant'. These types of clients tend to know so little, they don't appreciate how little they know.

They think their wall of participation awards makes them a world-class athlete, and all those hours watching House have made them a doctor – and the fact that no one ever told them otherwise makes it all true. Here's what Bryce Bladon recommends you do...

08. We don't have any content at the moment. Can you just design the site and we'll put it in later?

Yep, no problem. You don't have any content whatsoever, no idea on a colour palette, not even a slogan. You haven't even decided on a company name. But of course I can design you a site. I have no idea what it will look like. Maybe I could add some teddy bears, flowers, and do the whole thing in Comic Sans? That would work perfectly with what you don't have in mind, right?

Your likely response will be: "No, sorry, we will need to discuss the content of the site and your objectives before we can do any wireframing or design work."

But you want to say: "Get out of my office right now and stop wasting my time, you pea-brained numpty!"

Ah, the old 'make it pop'! A client's favourite. Basically it's the same old codswallop as 'make the logo bigger'. It's not going to make the design better. At best, the designer will maybe settle for making something a bit brighter, and at worst, the design will start to veer towards garish.

Your likely response will be: First, ask the client exactly what they mean. Do they want it brighter in general? Try to explain things logically, saying there's a reason for the existing colour palette. If they still insist, ask them to come back in a bit and while they are gone either pretend to make some changes and see what they say when they see the result, or simply ramp up the brightness on your monitor. Of course you could just make some subtle Levels tweaks.

But you want to say: "Pop? Pop? I'll make it pop alright!" Then turn all the text fluorescent yellow.

10. I need to withhold payment until you do a little more...

There are numerous ways a client can mess with your money. They might try to convince you that your price is egregious; they might withhold payment until you do more (essentially free) work; they might drag their feet when it's time to cough up.

Fortunately, the worst nightmare client you can encounter as a designer is also the easiest to avoid. But saying that to someone who finds themselves here isn't very good advice. Here's how Bryce Bladon deals with cheapskate clients.