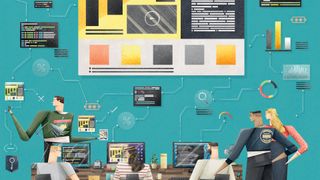 Technological developments are, inherently, game changers. With each advancement made in the tech we use – from popular consumer electronics to software developments in niche markets – we pave the way for the next.

Packt, creators of the skills learning platform Mapt, asked some of its developers-turned-bestselling authors for their opinions on what have been – and will be – the biggest game changers in the tech industry. Here's what they said.

While Java still is, and probably will remain, a staple technology, a range of factors – including the development of new languages, and the rise of JavaScript on the server – have meant that it now faces more competition than ever.

Packt author Luis Augusto Weir says that when he started his career, many developers were doubtful of the promises made by other languages, and would often stick to what they knew. "I was initially a PHP/JavaScript developer and the Java guys thought such languages would never kick off in the enterprise," he says. "It just so happened that it was the opposite!"

"Java is still a major language," explains Weir, "but others like Node/JavaScript, Go, Ruby and PHP are also major in the enterprise. They're getting more popular with each day."

Java is now 21-years-old, and still dominates in many surveys (Java came third in Packt's 2016 Skill Up report), but there's no question that these days there's a lot more on the buffet table to choose from. Can Java remain relevant in the face of new developments, or will developers start to look for a better toolkit to help them achieve what they need?

The best is tech to come

Packt author Robert van Mölken, started developing when he was just 11 years old, creating games with his friend using QBasic. For him, the biggest change in technology hasn't yet happened – because we're on the very cusp of it right now.

"I'm personally investing a lot in IoT and disruptive innovations like beacons, blockchain, machine learning and NoOps," says van Mölken. "All these things are going to change our world completely in the next year. With the rise of these innovations and quantum computing, the world will change so fast toward 2020 that it will probably be a little scary."

"In addition to this, we're coming a long way with the cloud," he continues. "This is because of different architecture, integration patterns, and the decreasing need for operations. I think the biggest change has yet to come, when the adoption rate of cloud increases."

Like many in the tech industry, the biggest development in technology for Vesterli has been the growth of machine learning. But while studies such as this one from the University of Oxford suggest that the top jobs most at risk of being taken over by AI are taxi drivers and receptionists, Vesterli is more interested in the role machine learning will take back in its place of origin: the tech industry.

"I think machine learning has the opportunity to make a significant dent in the huge backlog of unbuilt IT systems," says Vesterli. "Every organisation I have worked with wants to use more IT, but they are unable to get the skilled developers they need, and also have a hard time managing large portfolios of IT projects."

"The big challenge machine learning is still facing, however, is accountability," he says. "We've reached the point where an IT system can analyse huge amounts of data and improve a bank's bottom line by making better credit decisions, but we still can't ask it to explain why it came to that specific decision. When somebody cracks that problem, machine learning can improve the productivity of IT by an order of magnitude."

Self-service IT is quickly becoming the norm within many businesses, with the aim of decreasing the demands made on IT departments and time taken to request approvals. While there are a few concerns about giving so much capability to users (not least whether or not they are equipped to successfully use such systems), as those veterans out there who had to show users how to plug their keyboard in or set up their emails might remember, it is possible to successfully implement a new technology or system and have users adapt to it, so long as the right support is provided.

For author Adrian Ward, self-service IT is not only the thing that has changed in the tech industry the most so far, but it's also "the most exciting trend on the horizon". Why? Ward explains that giving power to users, whether through desktop or cloud tools, is the quickest way to encourage adoption of new technologies.

With self-service IT, something that could otherwise take months to adopt across a company could be integrated in a matter of days. What's more, having a slow process on the side of the end user could even have serious implications for the adoption of more radical technologies in the long run.

Want to get to grips with the next game-changer? Packt has launched Mapt, an online learning platform built exclusively for professional developers to help them gain a competitive edge by filling in knowledge gaps and charting learning journeys towards professional goals. Built for, and powered by, developers, Mapt by Packt aims to "help the world put software to work in new ways".