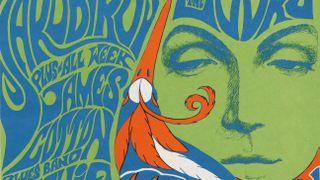 Being a creative professional is all about standing on the shoulders of giants. When you come to study the greats of the 20th century, it’s instantly obvious how much influence they have over today’s design output. (If you didn’t go to art college, check out our guide to the biggest art and design movements, and you’ll soon get what we’re talking about).

But if the influence of movements such as Bauhaus and the Swiss School are obvious in the designs of today, there are also many approaches that seem to have fallen out of favour.

It’s always good to freshen things up once in a while, though. So if you’re ever feeling that your illustration or design portfolio is starting to look like everyone else’s, it might be time to check out these past art and design trends, and see if they can inspire you towards a new way forward.

A technique dating back to Roman times, it was incorporated into European painting from the early Renaissance onwards, and became an influence on interior design and architecture, theatre set design and traditional matte painting for movies, as a way to suggest greater space than actually exists.

Nowadays, it’s mainly seen in eye-catching wall murals, such as those featured above. But surely we’re wasting trompe l’oeil by restricting it to just a handful of tourist attractions?

With the flat design movement on the wane, and CG-generated 3D imagery often seeming overly geometric and soulless, perhaps it’s time for designers and illustrators to revisit this technique and find new ways to incorporate it into contemporary design too.

No one’s saying that’s an easy thing to pull off, but to the victors, the spoils...

Originating in the 19th century, the word kitsch literally translates in German as ‘trash’. But nowadays it’s used to refer to art or design that some see as vulgar, garish and sentimental; yet which can nonetheless be appreciated in an 'ironic' way.

This may apply to mass-market consumer products, such as Barbie dolls, Hello Kitty merchandise and Disneyland theme parks. But it can equally refer to work that’s knowingly created as kitsch.

Kitsch is one of those things that’s difficult to define, but easy to identify when you see it. Check out, for example, Jeff Koons’ statue of Michael Jackson and Bubbles above, and it's obvious you’re looking at kitsch.

While kitsch is ever-present in our consumer society, its value as a design element seems to have ebbed amongst the the elites in recent years. That said, we’re starting to see interesting approaches blending the ‘kitsch’ with the ‘tasteful’ (in, for example, the hugely successful Funko range of vinyl toys).

So if you ever feel your design work is becoming too serious, dry and boring, why not take inspiration from the kitsch creations of artists like Jeff Koons, Vladimir Tretchikoff, John Currin and Thomas Kinkade, not to mention related movements like Pop Art and neo-geometric conceptualism … and see where the mood takes you?

Across Europe and America, the 1960s were one of the most culturally exciting times in history. But for every action, there is an equal and opposite reaction.

So the 1970s saw the flower child generation’s utopian dreams turn to dust amid the Vietnam war, oil crisis and Watergate. The new punk movement declared year zero on everything ‘hippy’. Charles Manson pretty much ruined the idea of communes. And the idea that LSD could unlock humanity’s untapped potential proved in practice a dangerous, often fatal illusion.

For all these reasons and more, the phenomenon of psychedelic art went out of favour, and has been largely limited to a small but persistent subculture to this day.

But while contemporary examples, appearing on T-shirts, gig posters and the like, are largely reductive, a brief glance at some of the leading practitioners of the 1960s shows that there’s far more to psychedelic design than you might think.

Characterised by (but not restricted to) such elements as bright, contrasting colours; extreme depth of detail; imaginative, curvilinear typography; warping and transposition of positive and negative spaces; morphing of objects and creative uses of phosphenes, spirals, concentric circles and diffraction patterns, the work of designers like Rick Griffin, Victor Moscoso, Bonnie MacLean and Wes Wilson still stands up well today.

These psychedelic styles developed internationally in the following decade, via the work of such artists as Bridget Riley, Mati Klarwein and Hipgnosis, creators of some of the best 1970s album covers. But the inventiveness and possibilities of those times quickly faded, and psychedelia quickly degenerated into an object of caricature and parody in films like Austin Powers.

In a 21st century dominated by flat, functionalist design, though, we’d love to see a renaissance in the vision, optimism and free thinking of the original psychedelic designers.

The neo-expressionist style of painting and sculpture emerged in the late 1970s as a reaction against the over-intellectualised trend for abstract art. The group that called itself the Neue Wilden ('The new wild ones”) were all about conveying violent, raw emotions through vibrant colours, distorted forms and an instinct-based approach to mark-making.

The movement was a huge critical and commercial success, dominating the art market until the mid-1980s; today, its most famous exponent is probably the late Jean-Michel Basquiat.

But then it faded as quickly as it had flared. In January 1986, The Times declared: “An artistic moment has passed…. it is unlikely that they will receive the same kind of attention again.”

While the work of artists such as Julian Schnabel, David Salle, Sandro Chia, Francesco Clemente, Anselm Kiefer and Georg Baselitz continues to command high prices at auction, the spirit behind the neo-expressionist movement never really influenced the broader creative industries in a major way.

And we feel that’s a pity. Because the idea at its heart (making an emotional connection with the audience) lies at the heart of all art and design.

And so while it does indeed come across as pretty ‘wild’, the work of these angry pioneers is well worth revisiting today. We’d love to see the revolutionary energy of the Neo-Expressionists, if not necessarily the actual style itself, reflected in modern art and design.

Technology brings countless improvements to our lives, but sometimes we get lost in the scramble to adopt the new.

And so, just as true music fans have moved back to vinyl, there’s a lot than can be done with film-based cameras that just can’t be matched by digital ones.

A couple of years back, we brought you 23 beautiful photos that prove film is not dead, and a small but significant shift back to the delights of analogue has continued to this day, particularly from fine art photographers and landscape photographers.

Sometimes film is used to create a purposely retro look, but more often it’s simply a recognition that an analogue approach can capture scenes in a way that a coldly calculating digital camera just can’t, even with all the photo editing tools in the world.

But it’s not, of course, about choosing sides; it’s about choosing the right tool for the job, and being open to new ideas. And isn’t that, essentially, what being a creative professional is all about?