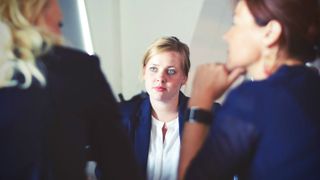 Few of us enjoy job interviews. But if you’re going to land your dream design job – whether it's a junior designer role or art director of an agency, it’s a hoop you’re going to have to jump through at some stage, so it pays to be prepared.

And part of that means knowing the key phrases that will invariably mess up your chances, the moment you say them. In this post, we list five key sentences to avoid, why they’re so inappropriate, and what to say instead.

Yes, many employers are out to pay you as little as possible. Yes, you should be forthright and not accept less than what you’re worth. But that doesn’t mean you should start laying down red lines before you’ve even got the job.

Raising the subject of pay within the interview is presumptuous, off-putting, and a big bugbear of employers such as Keren Lerner, founder and MD of London agency Top Left Design, especially when it comes from young and inexperienced applicants.

“That attitude of ‘How much are you going to pay me?’, right away, immediately puts me off interviewing someone,” she stresses. “The problem is that people who are just graduating often think they’re much better than they really are. But even with a four-year degree, they’re really not.

“If you want to be good at design, it’s not just about making things look nice, or being artistic, it’s about real attention to detail; and you don’t get that until you start working for a company that has high standards.”

In other words, be confident but don’t be cocky, and wait until they offer you the job before you start to negotiate on salary.

That said, if you are asked what your salary expectations are during the interview, you should certainly be prepared to provide a figure – which means it pays to do your research in advance, work out what the going rate for the role should be, and have a number in mind that will satisfy your own expectations.

Don’t worry about overshooting a little; these things are not totally scientific, and they can always come back with a lower offer. But ask for silly money, and they’ll more than likely pass you off as a fool, and not offer you the job in the first place, so  be realistic.

If you’ve been asked to interview, it’s a likely sign that someone’s impressed with your design portfolio. Good job. But that’s only got you to the first stage.

To succeed at interview, you’ve got to explain the thinking behind your work, the challenges you faced and how you overcame them, and just generally sell yourself as someone who can design, not just make pretty pictures.

If you fail to grasp this, and wrongly assume that your work “speaks for itself”, you may as well not bother showing up, believes David Johnston, co-founder of London design agency Accept & Proceed.

“At interview, we look for people who can articulate their creative process, describe design challenges they’ve experienced, and explain the rationale behind their creative decisions,” he explains. “Seeing these qualities in designers gives us the confidence that they can grow as part of our team.”

03. “I actually don’t know much about the company”

In our digitally connected age, it’s often easy to find out lots about a company just by visiting their About Us page or checking them out on LinkedIn. But if you can’t find the information you need there, that’s no excuse for giving up.

Because if you walk into an interview showing that you’ve made little effort to research your prospective employer, why on earth would they think you’re going to make any effort as an employee?

So get creative with Google; read all the blog posts, case studies and articles you can; follow relevant social media accounts and network with the right people; ask the right questions, and generally show that you know how to do research. It’s going to be a big part of any design job you get, after all.

That said, also don't spit out a load of facts and figures during the interview, to “prove” you’ve done the work. It’s more about coming to a greater understanding of the company in your own mind, so you can work out what it is they’re looking for, and how you can sell yourself as the right person to provide it.

“At interview, the candidates who stand out are the ones who’ve done their homework by researching our work and our approach, and can use it to show us a little more of their personalities,” explains Asa Cook, creative director at global branding agency Design Bridge .

Julia Darze did just that in her interview for a role as junior designer at Birmingham creative agency LIFE, and was later told it was key to her success. “I just told them how much I wanted to be there; how much I wanted to be a designer and how LIFE was the perfect fit,” she explains. “Honestly, although not in an X-Factor sob story kind of way.”

Sarah Gray, a designer for Dublin agency All Out Design, tells a similar story. “I believe I got my job by being interested and enthusiastic in the company,” she says. “For instance, I remember talking about their work and saying how exciting particular project looks and how I'd love to get involved with something like that.”

In a way, it’s a bit like dating, where showing an interest in the other person will get you much further than just going on about how great you are.

“People are looking to hire people who they're gonna be able to get on with and spend a lot of their week with,” Gray reasons. “So making an effort to talk to the interviewer about something they, as individuals, are interested in is key.”

Towards the end of the interview, you’ll be asked if you have any questions. “And the worst thing you can say is no,” stresses Dorina D’Ambrosio, creative director at behavioural marketing company The Market Creative. “Make sure you have some questions up your sleeve, to show you’re interested in the job and company.”

Because although it may seem like otherwise, this stage of the interview is not actually for your benefit, but for the interviewer’s. It’s another way they can make you open up, get you talking and showcase your personality. So it’s an opportunity you need to grasp with both hands.

You may think that if you’ve investigated the company properly beforehand, you shouldn’t have anything left to ask, but that would be a mistake. Your research doesn’t reduce the number of questions you can ask at interview, it simply gives you a foundation for asking more intelligent and sophisticated ones.

As Lee Hoddy, creative partner at Conran Design Group says: “Following your research, you should have a point of view on what you like about the company, and build a profile in your mind. This demonstrates a curious mind-set during the interview and will inform questions to create a richer conversation.”

In design interviews, you should always sell yourself, exude confidence and project an image of positivity. But in doing so, it’s easy to get caught up in your own hype, and start exaggerating what your abilities and skillset actually are.

Don’t think, though, that this won’t be immediately obvious. Your interviewer's been around the block a few more times than you have, and will spot a chancer a mile off. So being honest is always the best policy, and if you’re looking to impress people, enthusiasm is always going to be achieve more than fake claims that will almost certainly be seen through.

“I think the worst thing you can say in an interview is something that’s untrue, because if they sense you’re talking crap, you just look even more under-experienced,” says Gray.

“It’s much better to be honest and say you don't know how to do a particular thing but you'd love to learn how; that way, you come across more confidently. In fact, there have been two occasions when employers said they liked me because I was honest about my strengths and weaknesses.”