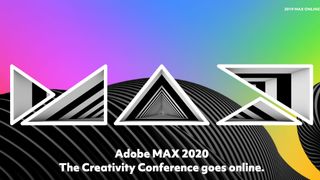 Adobe has just announced that its creative conference, Adobe MAX 2020, will be a "digital experience," rather than the in-person gathering of years gone by. Adobe MAX will take place on 19-21 October, 2020, and unlike previous years, it will be completely free for creatives to attend.

This is great news for anyone who has wanted to attend this creative bonanza previously but has been put off by the cost of a ticket, or wasn't able to travel. Adobe promises it is planning an "immersive event that stays true to the MAX spirit of mind-blowing creativity and inspiration".

What sort of thing can you expect from Adobe MAX 2020? Adobe says you'll be able to "learn from your design heroes, see the latest in Adobe Creative Cloud, and ignite your passion for all forms of creativity." That sounds pretty good to us, and we can't wait to see how the conference transforms its format online.

What can you expect at Adobe MAX? Well, Adobe traditionally uses its conference to announce major changes and new features in its suite of creative apps, Creative Cloud. This year, we're expecting the release of Illustrator for the iPad, which was announced last year at MAX, and there are bound to be plenty of other announcements ahead.

For a taste of what to expect, let's take a look at last year's hottest MAX announcements, as we reported them at the time.

Photoshop on the iPad has launched!

The wait is over: Photoshop on the iPad is here. This powerful app has been built from scratch specifically for tablet users, with the interface optimised for touch and for use with the Apple Pencil. However, it's not quite a complete version yet – this first iteration focuses on core tools such as those for compositing and retouching workflows. Photshop for iPad is included with all Creative Cloud subscriptions, and also available to download from the app store.

Adobe has unveiled a brand new photo app called Photoshop Camera. The AI-powered app aims to bring the power of Photoshop to the point of capture on a smartphone. Sensei technology enables the app to intelligently recognise the subject of a photo and apply effects, both realistic and creative. It's open for early access now, with general release planned for early 2020.

Adobe's dedicated art app Adobe Fresco launched earlier in 2019 (read our Adobe Fresco review), but it was just for iPad users. Quick work from Adobe, because now there's a Windows version of Fresco available too. At the moment it’s for users of Microsoft Surface Pro X devices and Wacom MobileStudio Pro hardware only, but Adobe is working on expanding that list.

It was previewed at 2018's MAX, and now Adobe Aero has been officially released. This iOS mobile app is the first tool to enable designers to create and share immersive experiences in AR, without the need to code. Download it for free, for phones and tablets, from the App Store. Alternatively, read more on the Adobe blog.

"Immersive media is proving to be a powerful storytelling medium, and completely changing how we interact with the world around us," says Stefano Corazza. "With augmented reality (AR), we can merge digital content with the physical world to create and deliver next-generation experiences."

Adobe has added coediting capabilities to XD, enabling multiple designers to collaborate on a project at the same once, and see changes in real time. A Different designers can have the document open on their personal device, with any updates appearing in real time for all co-editors. This update could be a real game-changer for product designers.