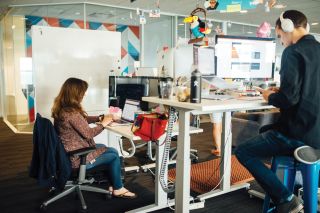 It’s no secret that over the past few years IBM has been hiring hundreds of designers and rapidly scaling up its design teams in a bid to place design firmly at the core of its culture. At the centre of this is IBM Design Thinking, a set of principles that are being taught to tens of thousands of IBM employees, whether they work in design or in a call centre.

With approximately 400,000 employees in total, rewiring the company’s collective thinking is a major operation. We quizzed Greg Storey, design practice manager at IBM Studios – the cultural centres of design at IBM – on how the transformation is going.

net: How would you describe the kind of design community you’re trying to build?

Today, IBM is scaling design and design thinking at a scale no one has attempted before. Design thinking drives the creation of hundreds of products, services and digital platforms for engaging IBM clients and employees. To give you an idea of the scale we have to consider, IBM has roughly 400,000 employees and contractors around the world. Add to that the millions of IBM product users and clients (and their clients) and you get an idea of how our design systems have to scale. IBM is singular in this regard.

net: How is IBM tackling this?

Implementation takes place through a company-wide education series and a variety of workshops. Roughly 200 multidisciplinary teams across IBM are using design thinking in their work – split between product and client-facing teams. 25,000 IBMers have already received design thinking education. By the end of this year, that number will grow to 100,000.

While this focus on design may be relatively new for many companies, that is not the case for IBM. In 1956 – 60 years ago – shortly after becoming president of IBM, Thomas Watson Jr. hired Eliot Noyes to create a first-of-its-kind corporate design programme, which encompassed everything from IBM products and buildings to logos and marketing collateral. Noyes extended his team by hiring some of the best design talent in the world as consultants, including Paul Rand, and Charles and Ray Eames. Later, at a lecture at the University of Pennsylvania in 1973, Watson made the iconic statement that “good design is good business”. This strong design heritage is another thing that sets IBM apart.

net: You’ve hired hundreds of designers in a relatively short space of time. How do you manage that rate of recruitment?

IBM Design general manager Phil Gilbert and his core team knew that to hire as many designers as they wanted in such a short time they would need to recruit directly from universities and design schools. Special attention (and staff) was directed towards recruiting and advocating the unique opportunities IBM designers face compared to what other companies are doing. The message has been well received, as tens of thousands of portfolios have been submitted by graduates from nearly 100 design schools, including Stanford, SCAD, Carnegie Mellon, RISD and Parsons.

net: What do you look for when hiring?

Passionate problem solvers who are able to empathise with users and use that  empathy to make exceptional experiences. We are looking for researchers, designers, and developers from a variety of skillsets and backgrounds, from recent graduates to industry veterans. We want to see portfolios with strong craft, evidence of complex problemsolving skills (or systems-level thinking), and technical vitality (showing that you understand technology and know the tools of the trade). Lastly, we need to see that all the work is human-centred.

net: How are things evolving since you started scaling up design teams?

Well, the floors are getting a bit more crowded as we hire more and more designers. Evolution of the programme is multifaceted, beginning with a big update to IBM Design Thinking, IBM Design Language, and the recent unveiling of the brand new IBM Design Research. Every team and programme within IBM Studios uses these tools to improve how they function and serve their users.

net: What are the core concepts of IBM Design Thinking?

Everything is a prototype – everything should be considered a work in progress and reiterated based upon users’ needs and advancements in technology. At the centre of IBM Design Thinking is ‘The Loop’, a set of three behaviours (Observe, Reflect, and Make) that encourage continuous attention to the products and services we deliver. For more details, I recommend reading the playbook, which is completely open to the public.

net: How did the Design Thinking principles shape Bluemix, your tool for cloud app development?

There is a fantastic article about this very topic that I recommend reading. Simply put, IBM Design Thinking forced the Bluemix design team to focus on users instead of functions and capabilities. From their research, they were able to work with management and engineering to create the experiences that developers, from an array of company sizes and types, wanted and needed.

net: How does design fit into the rest of the company?

From what I have observed, design fits into most of the organisation starting with our design thinking. During my first project at IBM, I worked with folks who run a support call centre. They walked me through the outcome from a design thinking workshop they had conducted on their own to improve how their team works together. These folks are far from ever being considered ‘designers’, but there they were, using design on their own with successful outcomes. It’s fantastic! So how does design fit into the rest of the company? Like a glove.

net: As design practice manager, what does a typical day look like for you?

My schedule varies depending on who I’m working with that day. When you have studios around the world, there are some creative scheduling needs from time-to-time. Otherwise my day is like most designers’: it begins with coffee and ends with a beverage that is not coffee.

net: What does your role involve?

Whatever it takes. Sometimes that means giving a presentation on the IBM Studios programme to a group of new hires. And sometimes that means cleaning up a studio space after a workshop and preparing it for a totally different activity. There is so much going on on any given day that there are plenty of opportunities to shake up the schedule and do something different. I have yet to have one week be a repeat of the last.

net: Your website describes ‘empowered teams’ that can make decisions without having to wait for sign-off from multiple stakeholders. How does this work?

I can’t speak for every team – it’s a very large company – but my experience is that we are not only empowered, but expected to make decisions. On my team, we’re are tasked to move forward – even if that means making a mistake – so as long as we learn from the experience, and use it to inform better decisions in the future. This freedom and responsibility also help us become better Wild Ducks – independent thinkers who challenge the status quo.

net: What are the physical workspaces like at IBM Austin?

We have two floors, both with open floorplans. Almost everything is on wheels (desks, chairs, whiteboards and televisions), which makes it easy to reconfigure team workspaces. The floor on which the IBM Studios sits features four collaborative spaces with hanging whiteboards, which we can use to divide each of those spaces into four working areas. These spaces are in constant use by designers, ad hoc teams and workshops. This setup is incredibly flexible – it can cater for a single designer working on a big journey map, right up to an IBM Design Thinking workshop for 50 people or more. It’s pretty awesome. Austin was the first studio of this kind, and my team is working to build out the experience to all 29 studios around the world.

net: How is the space decorated?

Just about every wall surface is coated with whiteboard paint, which means there are sketches, journey maps and wireframes everywhere. We have the Make Lab, featuring a slightly used American Cameo automatic press, and we have an HP Designjet T2500 that is constantly cranking out large-format prints. These things, combined with a metric ton of sticky notes, make for walls filled with ideas, schematics, screen prints of original art, and all kinds of posters. Here and there you’ll find unique, one-off installations created by a designer who had some time and a lot of inspiration. This is all to say; our walls are filled with wonder and amazement, with a bit of amusement here and there.

This article was originally published in net magazine issue 286. Buy it here.